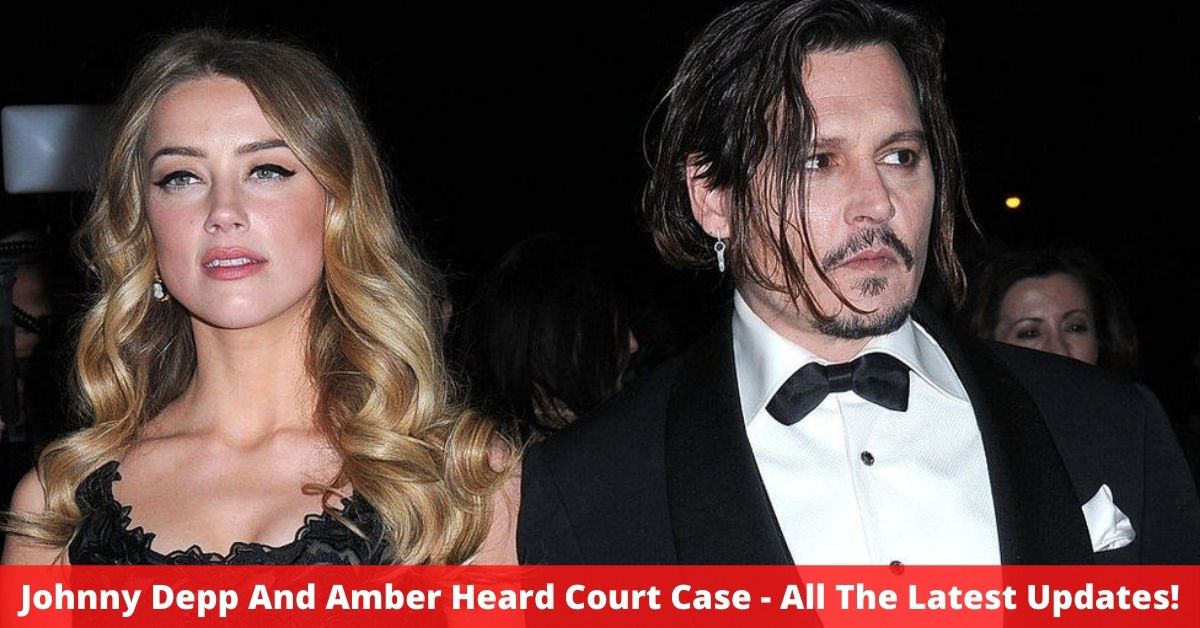 Both Johnny Depp and Amber Heard were seen arriving at the Fairfax, Virginia courthouse, where their $50 million defamation trial is still ongoing.

Depp sported a gray suit and sunglasses, while Heard chose a white blazer and black slacks.

In Fairfax, a packed house gathered to watch Depp continue his testimony

The courtroom in Fairfax, Va, where Depp will give his second day of testimony, was packed on Wednesday.

“This is the longest queue we’ve ever had,” a sheriff in the court told The Washington Post just before Depp began testifying in front of the 100 witnesses and the 10-member jury.

He commented, “I’m amazed no one is dressed as Jack Sparrow.” “I’m a silent supporter of Johnny Depp because of the allegations leveled against him. I grew up watching his films.”

“It’s also spring break.” I couldn’t think of anything else to do than stare at a petty celebrity feud.”

During their marriage, Depp recalls Heard’s ‘hatred’ for him

Johnny Depp began his evidence on Wednesday by declaring that his ex-wife Amber Heard seemed to have a “pure hatred” for him.

“As it escalated and continued to escalate, I went to what I learned as a youth, which was to remove myself from the situation so it couldn’t continue,” he said, referencing to his abusive upbringing, which he recounted at length on Tuesday.

Depp continued to portray himself as a soft-spoken gentle man damaged by trauma who was the victim in the poisonous and now-infamous five-year relationship, dressed in a grey suit with his hair pulled back into a ponytail.

Heard, dressed in a cream suit, appeared emotional while listening to his evidence on Wednesday, a change from her normal stone-cold demeanor in court.

Depp: I stayed because of childhood trauma and fear of failure

Johnny Depp testified to the jury on Wednesday that he stayed with his “abusive” ex-wife Amber Heard for so long because he “didn’t want to fail” and was terrified she would commit herself.

“I wanted to try to make it work,” he said. “I thought maybe I could help her.”

Depp cited a memory he had shared with the jury the day before — when his mother, Betty Sue Palmer, attempted suicide after his father, John Christopher Depp, had left — and said it influenced his decision.

“Ms. Heard had spoken of suicide on a couple of occasions, so that also becomes a factor, that’s something that lives in the back of your brain,” he said.

“I’m sure it’s somehow related to my father remaining stoic as my mother would beat him to death,” he added.

According to Depp, having Heard was like dating his mother

On Wednesday, Johnny Depp got Freudian on the witness, telling the jury that dating Amber Heard was like dating his mother.

“You slowly realize you’re in a relationship with your mother, in a sense,” he testified, comparing being abused by his mom as a kid to Heard’s alleged abuse.

On Wednesday, Johnny Depp got Freudian on the witness, telling the jury that dating Amber Heard was like dating his mother.

He compared being abused by his mother as a child to Heard’s claimed abuse, saying, “You eventually realize you’re in a relationship with your mother, in a sense.”

According to Depp, his ex-wife discovered “weaknesses” in his life experiences, which “became ammunition for Ms. Heard to verbally decimate me.”

The self-proclaimed “number one supporter” of Johnny Depp told The Washington Post on Wednesday that she had already spent $10,000 only to watch his trial.

Yvonne de Boer, who met Depp in the 1980s and fell in love with him, spent all of her vacation days in Fairfax, Va., and is the first person in line every day, arriving at the courthouse at 1:30 a.m.

“I just wanted to be here for him so he knows he’s not alone,” the fan, who claimed to be a close friend of the actor, stated.

Fans dressed up as some of Johnny Depp’s movie characters packed the courthouse in Fairfax, Virginia, to hear his evidence on Wednesday.

Winter joked, “The only thing I’m missing is a cigarette holder that would hang out of the corner of my mouth.” “They wouldn’t allow it.”

Depp: When ‘I was in need’ Heard denied me medication

Johnny Depp alleges that his ex-wife Amber Heard refused to give him medication to help him detox from a Roxicodone addiction.

“I was in need,” Depp testified, accusing Heard of ignoring his suffering.

Depp later claimed that he sent Heard to a luxurious hotel with her friends so that he could detox alone, alleging that he sat in a hard chair for days on end listening to the same song on repeat.

Depp recalls having his fingertips severed

During a confrontation between the couple in Australia in March 2015, a handle of vodka tossed by Amber Heard smashed and sliced the tip of Johnny Depp’s finger, the actor testified Wednesday.

Depp explained, “I was looking at my bones poking out.”

During a confrontation between the couple in Australia in March 2015, a handle of vodka tossed by Amber Heard smashed and sliced the tip of Johnny Depp’s finger, the actor testified Wednesday.

Depp explained, “I was looking at my bones poking out.”

Also Read: Alexander Gilkes’ Net Worth – Everything We Know!

According to Depp, Heard threw two bottles of vodka at him, the second of which caused the damage for which he required surgery.

“I have no idea what a nervous breakdown feels like, but that’s probably the closest I’ve ever come,” Depp remarked of the injury’s immediate aftermath.

Heard angrily refutes the story, claiming Depp was hurt during a three-day binge.