Naomi Judd Country Music Star Dies At The Age Of 76 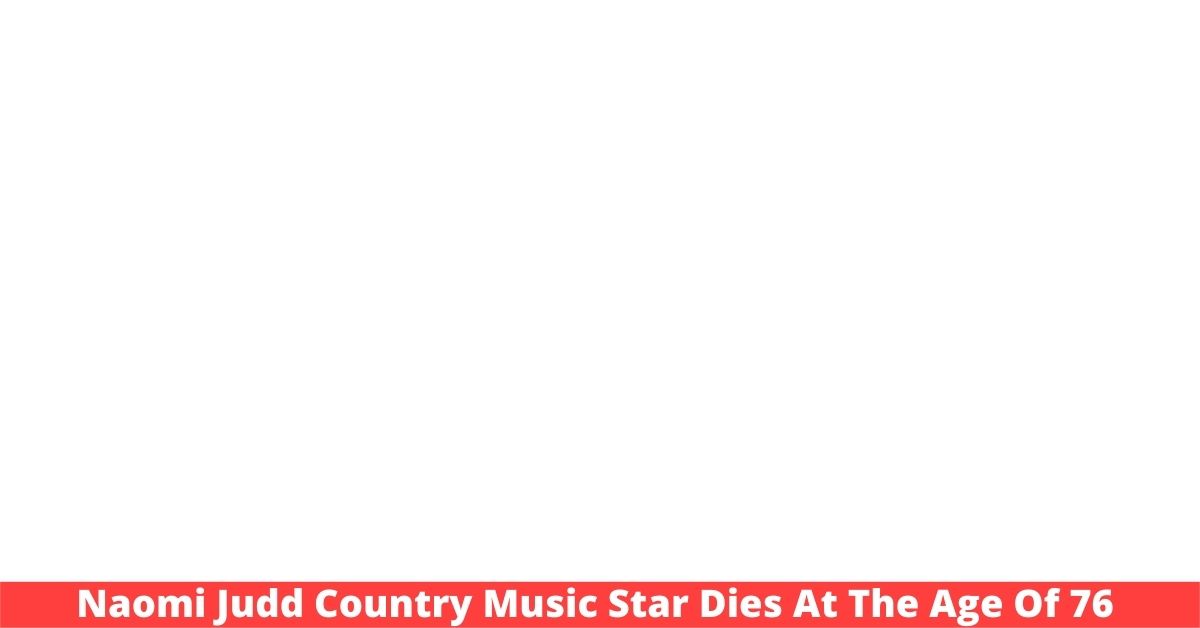 Naomi Judd died at the age of 76, just one day before she and her daughter Wynona were to be honored into the Country Music Hall of Fame.

She and Wynona, popularly known as the Judds, dominated a segment of country music in the 1980s, paving a new path for women.

Her daughter, actress Ashley Judd, posted a statement on Instagram on Saturday (30 April) announcing her mother’s death, saying she and her sister Wynonna were “shattered” by the news.

“We are navigating profound grief and know that as we loved her, she was loved by her public,” the statement added. “We are in unknown territory.”

Stoney Richards, a long-time country music DJ on Y108, couldn’t believe what he was hearing.

“Naomi was such a strong woman,” he added, “you’d never expect this to bring her down.” “We never expected any of those things to bring us down, but she leaves a fantastic legacy and two lovely girls, and the music, the music lives on in this business.”

Naomi and her daughter, Wynonna, became a professional singing duo in the early 1980s and went on to have a string of hit songs, including “Mama He’s Crazy” and “Love Can Build a Bridge,” in addition to selling over 20 million records.

Ashley Judd, the younger daughter, went on to become a well-known actress in her own right.
The Judds won five Grammys and scored 14 No. 1 hits over a seven-year period, according to the Country Music Hall of Fame.

Also Read: Is Travis Scott ready to be the Headliner for a Music Festival in 2022?

The Judds stated earlier this year that they would go on a 10-city “Final Tour” in September, following a farewell tour in 2011.

For the first time in years, they performed together in front of an audience at the CMT Music Awards earlier this month.

The duo was scheduled to be inducted into the Country Music Hall of Fame on Sunday.

Naomi Judd was born Diana Ellen Judd in Kentucky in January 1946, according to The Judds’ official website.

After the birth of her two daughters, Naomi Judd and her family moved to Tennessee, where she worked as a nurse. She started looking for a musical career for herself and Wynonna in 1980, according to the website, and made appearances on a local morning show.

Their first single, “Had a Dream (For the Heart),” was released in 1983 and reached No. 17 on the Billboard country chart. Their second single, “Mama He’s Crazy,” reached No. 1 on country radio and earned The Judds their first Grammy in 1984, according to the website.

According to the Country Work Hall of Fame, their music is “characterized by uncommon harmonies,” with “powerful” lead vocals and acoustic accompaniments with elements of “traditional folk, blues, and family harmony.”

After being diagnosed with hepatitis C, a potentially fatal viral condition, Naomi Judd had to stop performing in 1990. The duo’s final single, “Love Can Build A Bridge,” was released in December 1990, according to the website.

Naomi Judd highlighted her mental health during an appearance on “Good Morning America” in 2016, stating that she had been diagnosed with severe depression and anxiety. “I’m not leaving the house for three weeks,” the singer said at the time. “I’m not going out of my pajamas, and I’m not practicing basic hygiene.”

The following year, she released “River of Time: My Descent into Depression and How I Emerged with Hope,” a memoir about her struggles.

Also Read: Seasons Of Love From The Broadway Musical Rent

Celebrities like Carrie Underwood and Travis Tritt paid tribute to her on social media after learning of her death.

Country music lost a true legend…sing with the angels, Naomi!!! Today, we’re all sending up prayers for the Judd family“ wrote Underwood.

“Naomi Judd was one of the most delightful women I’d ever met,” Tritt wrote on Facebook, expressing his sympathies to the family. I had the pleasure of collaborating with her on a number of films and musical performances.”