Cast Of Game Of Thrones – Know Everything! 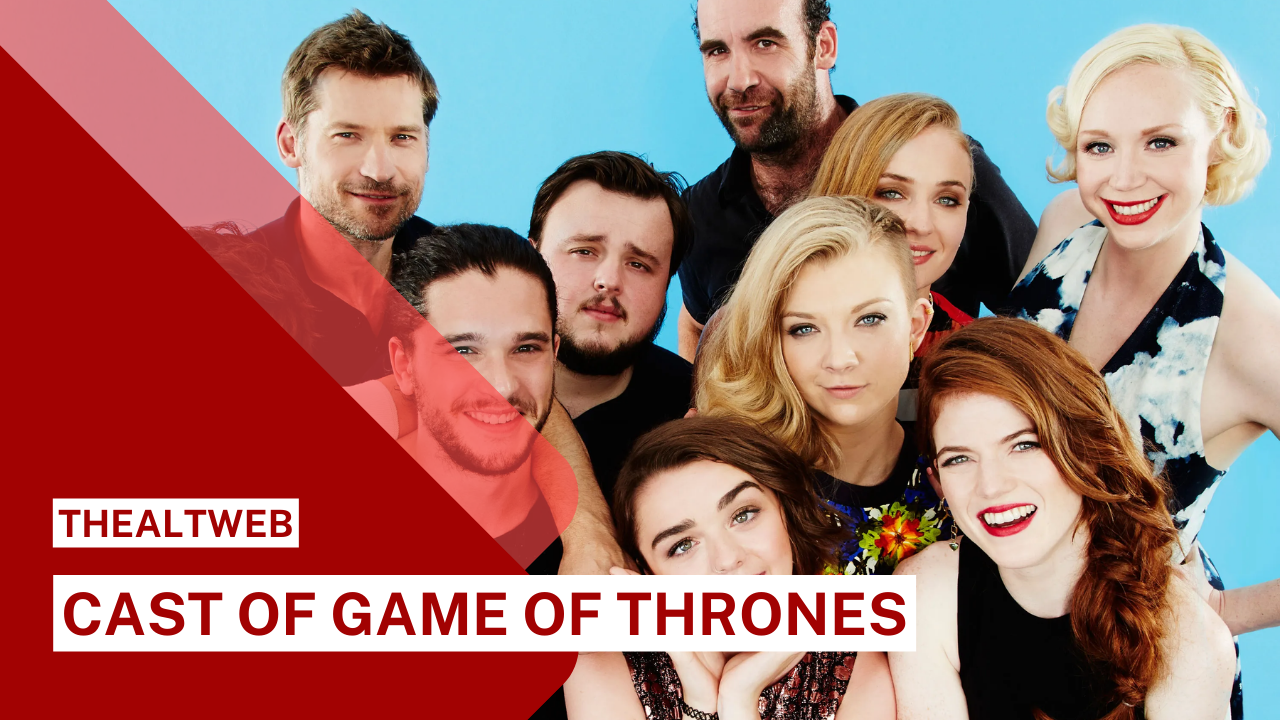 From 2011 until 2019, everyone appeared to be talking about “Game of Thrones.” The blockbuster HBO series based on George R. R. Martin’s “A Song Of Ice And Fire” novels broke viewership records, won several accolades, and drew more attention than any fantasy series since “Harry Potter.”

Season 8 brought the epic narrative of ice and fire to a long-awaited, much-anticipated finale… and fans were not happy. Some of the show’s lowest-rated episodes appear in its last season. The content gets lost in the midst of the debate: In just one episode, Daenerys Targaryen transforms from Mhysa to the Mad Queen. Rather than murdering the Night King, Jon Snow assassinates Dany before fleeing Westeros for a peaceful life among the wildings. The ascension to power of Bran Stark, when the remaining characters pick him as their king in the series finale, is perhaps the most surprising of them.

Despite the controversy, the cast of “Game of Thrones” has stayed committed to the show even after it ended, (mostly) supporting season 8 and its divisive decisions. Many actors’ great careers were launched as a result of the HBO series while existing actors’ celebrated careers were enlarged over the duration of the show. Although the ending marked the end of an era, the show continued for the cast. Following the game, here’s what everyone did.

Kit Harington began his career on the stage before landing his breakout role in “Game of Thrones.” Harington received widespread acclaim for his performance as Albert Narracott in the National Theatre’s production of “War Horse.” Following his triumph, he was cast as Jon Snow, alias Aegon Targaryen, the Sixth of his Name, Slayer of White Walkers, and Know-er of Nothing, in the HBO series “Thrones.”

During the run of “Game of Thrones,” Harington, like his friend and co-star Emilia Clarke, won many additional jobs. Along with Emily Browning, he co-starred in the 2014 film “Pompeii.” Harington also acted in the 2014 film “Testament of Youth” and the 2017 BBC series “Gunpowder,” which was based on his ancestor Robert Catesby’s role in the Gunpowder conspiracy.

“Game of Thrones” cast Richard Madden left the show early. Robb Stark, his character, died a horrifying death in Season 3 that shocked many. In retribution for breaching a marriage bond, the Freys massacre Robb and his army during the notorious Red Wedding. Despite the fact that the Young Wolf dies early in the series, his shadow continues to cast a shadow on the events that follow. The remainder of the Starks is left to pick up the pieces of Robb’s misfortune now that Robb and Catelyn are no longer alive.

Following the death of his character, Madden’s career flourished. In a 2016 West End revival of “Romeo And Juliet,” he repeated his role as Romeo. He starred as Prince Kit in the live-action “Cinderella” in 2015, and in Season 1 of the historical drama “Medici” in 2016, he played Cosimo de’Medici. He was nominated for a Golden Globe for his portrayal of Sergeant David Budd in the BBC drama series “Bodyguard” in 2018.

Despite their on-screen hatred, real-life friendship led Lena Heady to apply for the part of Cersei Lannister. Nobody could have done a greater job as the wicked queen, in retrospect. Cersei was taken to new heights because of Heady’s distinctive appearance (smirking and sipping wine). Cersei’s portrayal epitomizes the machinations, betrayals, and deception that define “Game of Thrones.”

Sophie Turner rose to fame because of her depiction of Sansa Stark in “Game of Thrones.” She made her acting debut as Lord Eddard’s eldest daughter, who proved to be one of the most divisive characters in “Game of Thrones,” with many viewers turning against her in favor of her heroic sister, Arya. Sansa’s journey through the series, on the other hand, should not be overlooked. Sansa is forced to grow up quickly after witnessing Joffrey’s real colors, honing her poker face in the political quagmire of King’s Landing before becoming Queen in the North in the series finale.

Maisie Williams, like Turner, was a first-time actor when she landed the role of Arya Stark on Game of Thrones. Williams has lots of opportunities to perform while playing Arya: Unlike her sister, Arya favored sword-fighting oversewing, and she defied societal norms to become one of the show’s most notorious badasses. Her character went so far as to murder the Night King, something Jon Snow was unable to do.

Williams’ other credits include a cameo appearance on “Doctor Who” in 2015, as well as leading parts in “Cyberbully” and the British sci-fi thriller “iBoy.” She has acted in a number of films, including “The Falling” (2014), “Mary Shelley” (2017), “Early Man” (2018), and “Then Came You” (2018). The Independent lauded Williams’ portrayal in “The Falling,” saying she “had the same mix of defiance, precociousness, and sensitivity” as Arya Stark in HBO’s “Game of Thrones.”

In the season finale “The Iron Throne,” Bran Stark, played by Isaac Hempstead-Wright, defeated other contenders to win the game of thrones, which was decided by the Westerosi lords and ladies. The Targaryens found themselves out of the game once Dany died and Jon was banished. Rather, Tyrion proposed Bran for the job, which was accepted by everybody. House Stark triumphed.

When he first heard that his character would be king, Hempstead-Wright was skeptical, but he eventually came around. He didn’t come from an acting family like many of his co-stars, having worked in commercials before landing the role of Bran Stark in “Game of Thrones” and making his feature debut in “The Awakening” in 2011. He also participated in a music video for Foals’ song “Exits” and gave his voice to the 2014 animated comedy “The Boxtrolls.”

Prior to his worldwide breakout role as Jaime Lannister, Nikolaj Coster-Waldau had a successful career in Denmark’s film business. After breaking through in the Danish thriller “Nightwatch” in 1994, he went on to act in a number of films in the late 1990s and early 2000s, but it wasn’t until “Thrones” that his career took off. With a redemption arc that saw him go from shoving Bran out a window in the first episode to defending Winterfell from wights in the last season, Coster-Waldau captured viewers’ hearts.

Before her fiery demise in “Game of Thrones” Season 6, Queen Margaery Tyrell enchanted fans. Margaery, a minor character in the books, was given greater screen time in the show, allowing Natalie Dormer to fully inhabit the part. Margaery’s desire for a crown sees her successfully manipulate both Joffrey and Tommen, however, the Tyrell queen severely underestimates her actual enemy: Cersei Lannister. She is introduced in Season 2 as Renly Baratheon’s wife, and she makes her queenly intentions apparent to Littlefinger (Aiden Gillan).

Natalie Dormer rose to prominence for her performance as Anne Boleyn in “The Tudors” from 2007 to 2008, and she also appeared in “Captain America: The First Avenger” (2011), when she locked lips with Steve Rogers for a brief scene. Dormer also starred in the 2016 horror thriller “The Forest” and as Cressida in the final two installments of the “Hunger Games” trilogy.

Fans of “Game of Thrones” will recognize Jack Gleeson’s depiction of King Joffrey as a throwback to a simpler era. Remember how we were all united in our dislike for the cruel boy king? Joffrey’s reign of terror continued until his wedding feast in Season 4 when he was poisoned. Joffrey had previously been the series’ most heinous villain. Fans detested him and awaited his comeuppance with bated breath.

Gleeson did an excellent job as a horrific figure. Joffrey dropped out of the performing scene after his death, but he eventually returned for theatre performances and a role in the BBC drama “Out of Her Mind” in 2020. “The lifestyle that comes with being an actor in a popular TV program isn’t something I gravitate towards,” Gleeson said in an interview with the Irish Independent.

Before gaining her big break on “Game of Thrones,” Gwendoline Christie began her career in the theatre. For the performer, the role of Brienne of Tarth was a dream come true. Christie read Martin’s “A Song of Ice and Fire” novels in preparation for the part and worked out hard to achieve Brienne’s powerful physique.

From 2012 through 2019, Christie portrayed Brienne of Tarth on screen. She appeared in “Star Wars: The Force Awakens” (2015) and “Star Wars: The Last Jedi” (2017) as First Order member Captain Phasma, in addition to her important role on “Thrones.” Christie returned to the stage after the series finale in a National Theatre Live production of “A Midsummer Night’s Dream” and signed on for Netflix’s 2021 adaptation of Neil Gaiman’s “The Sandman,” which was first published by DC Comics.

With her depiction of Daenerys Targaryen in “Game of Thrones,” Emilia Clarke became a household name. Though it’s difficult to imagine anybody else in that hairdo, Clarke was a latecomer to the show: Tamzin Merchant played the Mother of Dragons in the original, unaired pilot before Clarke took over.

In addition to “Game of Thrones,” Clarke played Han Solo’s first love, Qi’ra, in the 2018 Star Wars prequel “Solo: A Star Wars Story.” She made her Broadway debut as Holly Golightly in “Breakfast At Tiffany’s” in 2013 and had a major part in the 2016 film “Me Before You.”

In his early appearances as Daenerys’ arranged husband, Khal Drogo is quite simple to detest. Despite the early debate, Drogo’s character develops over Season 1, making his death a terrible blow to Dany and the rest of the cast. Jason Momoa’s charm may have contributed to Drogo’s appeal, since Momoa softened the character’s hard edges, giving the arakh-wielding Dothraki barbarian a hidden tender side.

Daenerys briefly reunites with a spectral Drogo and their unborn son, Rhaego, at the House of the Undying in Season 2, and David Benioff and D.B. Weiss brought him back for a cameo in Season 2. Following that, he starred as Declan Harp in Discovery Channel’s “Frontier” and as Baba Voss in Apple+’s “See.”