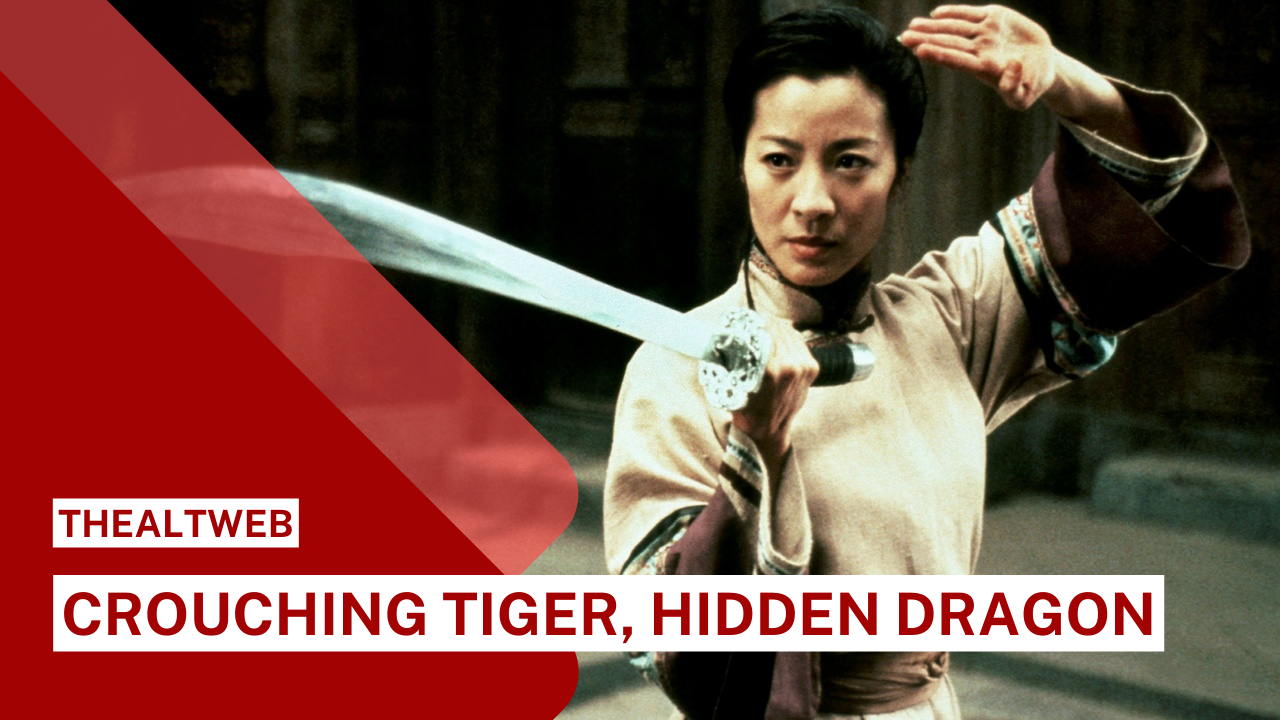 Crouching Tiger, Hidden Dragon, directed by Ang Lee, was an unexpected international smash in 2000. The plot is set in 19th-century imperial China and includes romance, melodrama, and eye-popping wirework action scenes. Li Mu Bai (Chow Yun Fat), a master swordsman and monk, decides to give up his weapon, the mighty and ancient Green Destiny Sword.

He’s had enough of the warrior life and has fallen in love with Yu Shu Lien, a fellow swordfighter and businesswoman (portrayed by Michelle Yeoh). A young woman in disguise steals the sword he donates to their mutual acquaintance Sir Te. Jen Yu (Zhang Ziyi) is the daughter of a powerful governor who is about to enter into an arranged marriage.

Jen Yu’s governess has been covertly training her in kung fu and sword fighting for years in a film where nothing is as it seems. In disguise, the governess is the criminal and killer Jade Fox (Cheng Pei-Pei), who murdered Li Mu Bai’s master and many others. When Jen Yu steals the sword out of boredom, it sets in motion a chain of events that will kill many of the characters.

Jen Yu’s bandit lover Lo Dark Cloud (played by Chang Chen) turns up to express his love for her again while a policeman and his daughter seek Jade Fox. What happens to the characters when Jen Yu walks away from her family after a series of fights?

What becomes of Jade Fox?

Jen Yu reveals to her master that she is capable of reading the stolen kung fu textbook. The diagrams were clear to Jade Fox, but Jen Yu’s ability to comprehend everything suggested she had covertly exceeded her teacher years before. This treachery enrages Jade Fox, and after saving Jen Yu from drowning during a duel with Li Mu Bai, she drugs the girl she considers her own child.

This comes after years of betrayals and mistreatment. Lu Mi Bai’s master irritated her because he would sleep with her but not train her. She became a bandit to finally be free, but her new identity as Jen Yu’s nanny is merely another type of enslavement. She defends herself by citing her bond with Jen Yu, and when it is taken away, she lashes out.

In her cave, she lays poison dart traps. One is successful in killing Li Mu Bai, but not before stabbing her. While she is relieved that her foe will perish, she admits that Jen Yu was the one she really wanted to murder — “my sole foe.” Her most recent request was turned down. It’s odd that the lies of someone she cares about the harm this thief and is deceitful the most.

What becomes of Li Mu Bai?

Li Mu Bai leaves his monastery because he can’t let go of his feelings for Yu Shu Lien. They never got together after knowing each other for years since she was betrothed to his brother, who died before they could marry. They never took the initial step because of societal obligations and shame, but he is ready at the start of the movie.

Jen Yu fascinates and distracts Li Mu Bai, and it’s evident that this is true both as a kung fu instructor and a guy. He wants her to submit to him and become his student, which is a form of servitude for her. When she chases the sword down a waterfall after he throws it, it signifies she may have lost the fight but won the war.

He’s clearly aware that he’s made a mistake and follows her to Jade Fox’s lair. She pulls open her outer shirt and asks, “Is it me or the sword you want?” when he wakes her up from her drug-induced stupor. He disregards this and saves Jen Yu from the poison dart trap set by Jade Fox. He shunts away all but one in a magnificent sequence, and that one is the one that kills him.

Jen Yu tries to make amends for her actions by obtaining antidote components, but it’s too late. He tells Yu She Lien with his dying breath that he has always loved her and that he has wasted his life.

What will become of Yu Shu Lien?

Jen Yu and Yu Shu Lien create an instant bond at the opening of the film, exclaiming, “Let’s be sisters!” They are, in many ways, mirror copies of one other. Yu Shu Lien appears to have complete independence as a respected businesswoman, but she was unable to receive training from the monks on Wudan Mountain, and she is expected to follow society’s rules. Jen Yu is seen by Yu Shu Lien as a younger version of herself who has a chance at happiness in normal existence.

Jen Yu seeks help from Yu Shu Lien when she runs away and gets into difficulties. She is helped, but she is also lectured, telling her that she must return the sword and return to her home. As a result, the two have a major brawl and exchange a lot of nasty words. Jen Yu’s selfish deeds lead to Li Mu Bai’s death, just as he had confessed his love for Yu Shu Lien.

She picks up the Green Destiny sword after his death, swings it at Jen Yu’s neck, and stops short. She returns the sword to Sir Te and instructs her to accompany Lo to Wudan Mountain. She laments her loss, but she breaks the cycle of vengeance by sparing Jen Yu’s life.

What will become of Lo Dark Cloud?

Prior to the events of the film, a caravan carrying Jen Yu is attacked by the legendary bandit Lo Dark Cloud. An expensive comb is taken from her hands by the cunning robber. Infuriated, she mounts a horse and pursues him across the desert, demanding her comb back. She reluctantly accepts that she must rest with him for a moment, and he is immediately pulled to her. She gives him a slap on the head and walks around the desert aimlessly. They fall in love when he saves her and nurses her back to health.

Jen Yu is captivated by his sense of independence and the way he lives. He tells her about a tradition that says anyone who dares to jump from the mountain will have their request granted by God. When a small child performs it to save his parents’ life, he knows it works the instant he jumps – he doesn’t die, but rather floats away, never to be seen again.

Jen Yu is sent back to her family by Lo, who expresses concern that she will be weary of living in the desert and that he will locate her when he makes his mark on the earth. He reappears in the midst of the film, and she dismisses him. Lo is transferred to Wudan to wait for Jen Yu after one final attempt in public that nearly gets him arrested.

What becomes of Jen Yu?

For decades, audiences have been baffled by the final sequence of Crouching Tiger, Hidden Dragon. Yu Shu Lien spares Jen Yu’s life after the murders of her master Jade Fox and would-be master Li Mu Bai, claiming that she knows about Lo and that he is waiting for her on Wudan mountain. Jen Yu makes it to the top and embraces him with tears in her eyes.

She recalls his narrative of the youngster who jumped from the mountain from a bridge at the top of the mountain. She asks him to make a wish, and he replies he wants to be back in the desert with her like they used to be. Jen Yu then leaps from the bridge and floats through the mists joyfully. Why does she abandon Lo when it appears that she has finally gotten her to wish?

What’s certain is that both Lo and Yu Shu Lien wanted her to go to Wudan. Jen Yu’s desire is evident from the start of the film, but no one will give it to her until she seizes it at that precise moment: independence.

What will occur in the future?

Yu Shu Lien will miss her companion and love now that Li Mu Bai has died. She will lament what might have been if only one of them had had the courage to question what they regarded as tradition. She’ll have the comfort of knowing how much Li Mu Bai loved her and that she offered Jen Yu a chance at a different life – one filled with love.

Lo’s request is granted, but not in the traditional sense. He realizes that what he had in the desert with Jen Yu was true and that she loves him. She leaves him with a lasting impression.

Jen Yu isn’t coming back. She finally achieves the independence she craves. It may be a selfish instinct, but she’s spent her entire life being controlled by others around her. Her parents want to marry her off to a powerful family so that her father’s reputation can be improved, but they don’t care about her sentiments. Jen Yu doesn’t want to have a master’s, so Jade Fox teaches her kung fu. Yu Shu Lien wants her to be with Lo, but Li Mu Bai wants to control her. It doesn’t matter if Jen Yu dies in that jump or if it’s simply a metaphor; she’s free.

The title “Crouching Tiger, Hidden Dragon” alludes to Chinese mythology and the concept of concealing one’s prowess from others. Outsiders can see both Jade Fox and Jen Yu’s strengths, and Jen Yu hides her full strength from Jade Fox.

According to Taoism, the color green signifies the yin or female side. The sought sword was given the moniker Green Fate by Ang Lee to express Jen Yu’s desire to control her own destiny. The term Jade Fox refers to a darker, older tint of green. Because of how badly she was treated by men, her identity as a woman is vital to the story.

The film helped popularise the wuxia genre around the world. Unlike the brutal crime thrillers directed by John Woo and Ringo Lam in the 1990s, wuxia draws its martial arts action from Chinese history. Some of these films have strong political overtones, such as Hero’s nationalistic imagery. Instead, Crouching Tiger, Hidden Dragon focuses on the conflict between family obligations and historical misogyny, which restricts women’s responsibilities.

What happened to kung fu movies in America?

Crouching Tiger, Hidden Dragon paved the way for a slew of other art-house action epics in the United States, with Zhang Yimou’s Hero and House of Flying Daggers among the most successful. Another example is Rob Minkoff’s The Forbidden Kingdom. The inventive, dynamic, and occasionally funny battle choreography appears in many of these flicks. Yuen Woo-ping, whose name may not be recognized by Western viewers, but whose work is, is the mastermind behind this.

He directed Iron Monkey (another popular wuxia epic rereleased in America) and many other films, as well as choreographed fights for The Matrix, Kill Bill, and Kung Fu Hustle. Yuen was more concerned with purity and flow of motion than with realism. Exaggerated and magical action sequences can be considered as an extreme manifestation of the character’s emotions in many of his films, much like musical theatre song acts.

What caused the art-house kung fu movies to fade away? The premiere of Iron Man in 2008 is the most likely answer. While superhero films and kung fu flicks both gained popularity around the same time, the Marvel Cinematic Universe changed the game by adapting superhero stories to many genres. Winter Soldier is a political thriller starring Captain America. Homecoming is a high school romance film. Ant-Man is a film about a heist. That adaptability and appeal to a global audience grabbed a page from Crouching Tiger, Hidden Dragon’s playbook and ran with it.