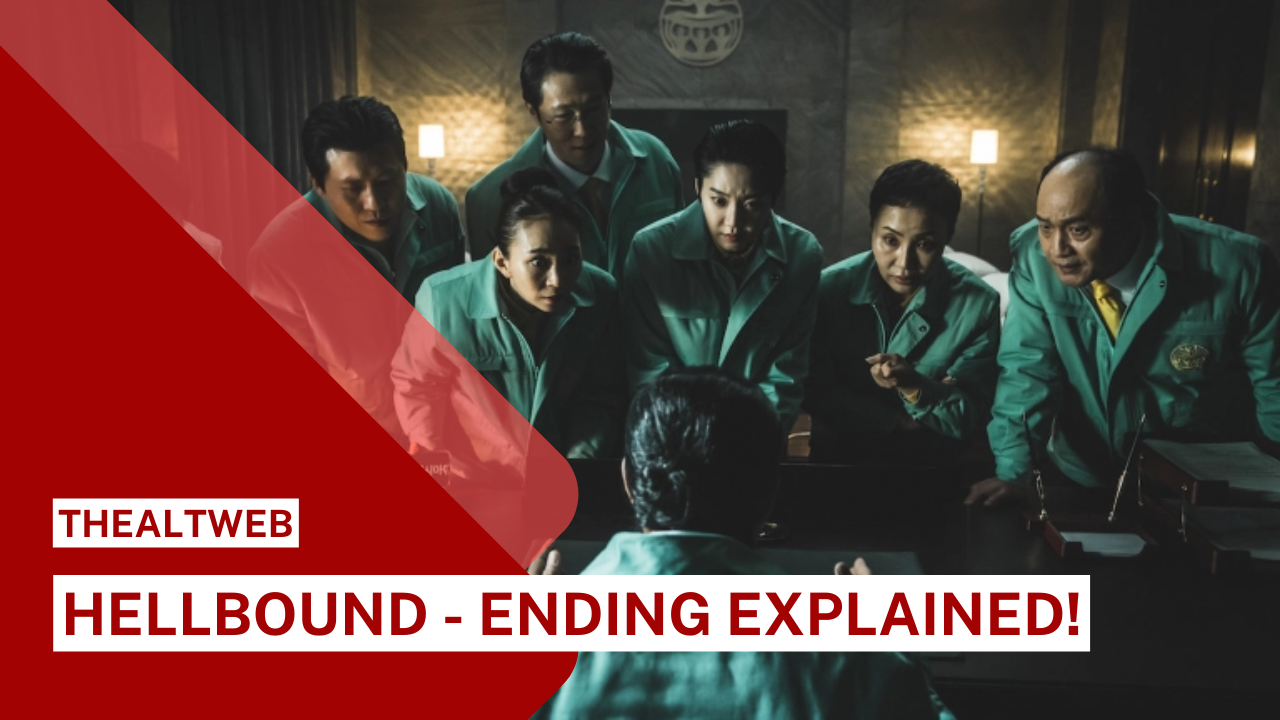 “Hellbound,” a new Netflix dystopian thriller series from South Korea, explores the themes of faith and dread. The episode begins with an unbelievable premise: seemingly regular individuals are visited by a ghostly apparition who informs them that they have been marked for death and will be sent to Hell at a certain time and day. When the appointed hour comes, a horde of demons materializes from the ether and annihilates the victim.

Two religious traditions contend that people who get the verdict are sinners and that the condemnations are an act of God attempting to show humanity the proper way of righteousness. The New Truth Society attempts to chronicle and broadcast supernatural phenomena so that the general public is aware of what is going on. Meanwhile, the Arrowhead is a zealous and violent cult that thinks God is pointing out sinners and wants his disciples to intervene.

A surprising discovery occurs about halfway through the six-episode season. Chairman Jeong Jin-soo (Yoo Ah-in), the New Truth Society’s leader, says that he knew about the demons 20 years before the events of the episode because he had been designated for death. He was the one who came up with the idea that the decrees are given to sinners because he was frightened that if mankind didn’t have a rationale for what was happening, things would spiral out of control.

The New Truth Society develops in popularity as he carries that secret to his grave. Years later, though, a child is born who threatens to upend society’s vice grasp.

What exactly is the significance of the child?

As Season 1 of “Hellbound” draws to a close, most of the major characters’ attention is drawn to Bae Young-Jae (Park Jeong-min) and his wife Song So-newborn Hyun’s child (Won Jin-ah). The pronouncement that the infant will be transported to Hell is given shortly after the child is born. The New Truth Society has taken a significant hit.

The New Truth Society’s philosophy does not incorporate the notion of original sin, according to Min Hye-jin (Kim Hyun-Joo), an attorney who has battled for years to expose the organization as a scam. Only individuals who have intentionally committed crimes in their lives are granted the decree, they have persuaded their followers. If a newborn is sent to Hell, it will confirm what Chairman Jeong Jin-soo has been trying to hide: that the decrees are being dished out at random. Min Hye-jin wants the parents to broadcast their child being transported to Hell.

Unlike some other religious-themed shows, “Hellbound” makes it plain from the start that otherworldly powers are at work. Smoke demons are, without a doubt, killing people in horrifying ways. Nobody knows, however, what the demons are or why they pick the ones they do. To try to control society, the New Truth Society and the Arrowhead — which are not officially linked but frequently coordinate in secret — utilize the concept that demons only come for sinners. They can even use their claimed morality to suppress nonbelievers with violence.

As a result, when both parties learn about the newborn infant who has been sent to Hell, they try to keep the news from reaching the general population.

Min Hye-jin and the cults face up in a final dramatic encounter.

Despite their best efforts, the New Truth Society and the Arrowhead are unable to intercede in time to save the doomed kid. Bae Young-Jae and Song So-Hyun carry their infant into an apartment building’s courtyard and invite the tenants to witness the child’s transfer to Hell. When the demons arrive, however, neither parent is prepared to witness their child being tortured and slaughtered. As the demons descend, they embrace the child between them, and as the family is zapped, both parents are killed, but the baby remains unscathed.

This is a historic event since the directive has never been disobeyed before. Skull Mask, an ardent live-streamer who serves as the Arrowhead’s de facto leader, is well aware of this. He appears on the scene after receiving a decree that he would be transported to Hell shortly after the baby, which he interprets to signify that he has been selected to right God’s blunder in condemning the newborn. In a flash of bewilderment, he tries to kill the infant until he realizes it is still alive. Min Hye-jin, on the other hand, manages to keep Skull Mask at bay until the demons arrive to drag him to Hell.

The packed throng is taken aback by all of this mayhem. Everything they’ve observed so far contradicts what religious groups claiming to know what’s going on have informed them. The mob refuses to allow officials of the New Truth Society to pursue Min Hye-jin as she runs with the infant, calling the church members “pathetic crooks” and “a bunch of liars.”

The church had had enormous social and political clout up until that time, so seeing the audience turn against the New Truth Society was a watershed moment. However, now that the world has discovered that their philosophy is wrong, their dominance looks to be eroding swiftly.

Min Hye-jin and the infant successfully hail a taxi after escaping. “I don’t know much about God… but there is one thing I do know, and that is that this planet belongs to mankind,” the cab driver informs Min Hye-jin. We should take care of our own affairs.”

In many respects, this sentence is a wonderful summary of “Hellbound’s” key themes. Despite being a scary and deadly force, humans have no influence over demons. This is a terrifying idea, but the New Truth Society and the Arrowhead make it exponentially worse.

Both factions took advantage of a time when mankind was gripped by fear and apprehension and used it to attain disproportionate power. The New Truth Society, in particular, fought hard to conceal the fact that they were well aware that their own ideology was incorrect. They pretended to want to improve society by teaching everyone God’s plan, but the truth is that they wanted to terrify people into believing they knew everything so they could control them. Consider a preacher who believes that a devastating hurricane is God’s judgment for humanity’s sins.

The taxi driver’s comments hit the nail on the head with what “Hellbound” is attempting to convey. It isn’t requesting that viewers dismiss the otherworldly. Rather, it urges us to be wary of those who try to control others by using our concerns about the supernatural.