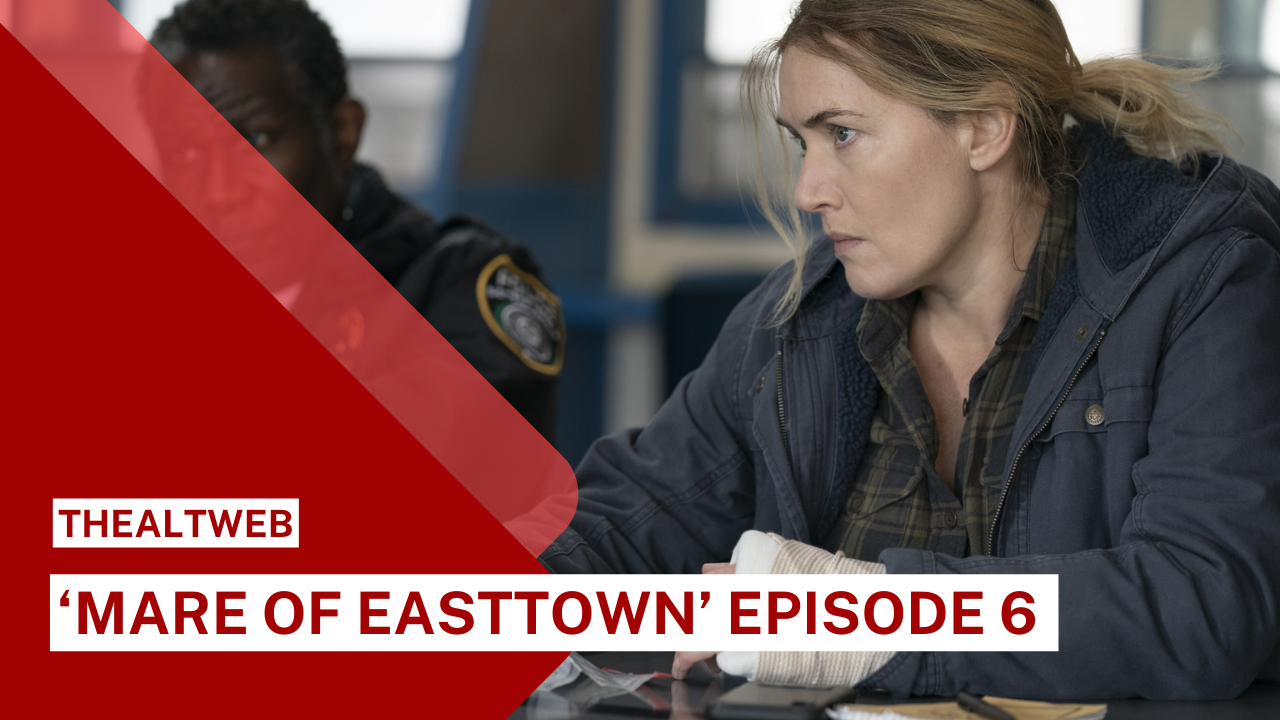 I get caught up in the details, as any great investigator would. Consider Erin McMenamin’s last name. She obtained her last name, as far as I can gather, from her good-for-nothing father Kenny, who is presently doing time in jail for shooting and wounding her ex-boyfriend and the supposed father of her kid on suspicion of murder. (Believe me, we’ll return to it.) Kenny is also close to his…brothers, right? cousins? Let’s assume John and Billy are relatives. Ross, not McMenamin, is their surname.

Stay with me, I swear I’ll take this someplace. Much of Mare of Easttown’s lingering secrets revolve around the “Ross” name, as of this episode (“Sore Must Be the Storm”). Mare (who has largely recovered from her gunshot wound) discovers a cache of Erin’s clothes in his flophouse, including a t-shirt from a Ross family reunion, after discovering the dead body of her friend Bethie’s brother Freddie (everyone on this show has a sob story, and usually more than one—not it’s enough to have a missing daughter, you also have to have cancer on top of it, that kind of thing).

The reason for the garments being at Freddie’s house is simple: Kenny told him he could take them and give them to his daughter, in the hopes that the gesture would allow his own daughter to live on. It was a genuine act of kindness from someone who isn’t known for his generosity.

Kenny’s surname is McMenamin, not Ross. Is this anything that can be explained? Finally, yes: Lori, John’s estranged wife, reveals to Mare (who already knows; this speech is for our benefit) that Kenny and Billy are cousins, not brothers, towards the end of the episode. As a result, Billy—who had confessed to Erin’s death to John, who had informed Lori, who had told Mare—statutory raped, pregnant, and killed his first cousin once removed rather than his niece. (However, according to the Internet, you can also refer to your first cousin once removed as a niece or nephew.)

I’m wasting so much time on this little topic for a reason: I spent so much time trying to figure it out while watching the stupid show!

Brad Ingelsby, the show’s creator and writer, has introduced so many characters by this point, so many broken and mixed families, so many missing young women, furious middle-aged women, and shiftless middle-aged men, that the primary murder mystery has become illegible. That’s not to mention the kidnappings and murders Mare and her late partner Colin Zabel solved. It’s on top of the ongoing turmoil regarding Dylan’s effort to cover up…something concerning his late ex-girlfriend through violence. I’m curious as to what sort of murder mystery becomes more convoluted and difficult to follow once someone confesses.

This isn’t to suggest the episode isn’t entertaining. The gory vision of Mare fainting against her attic steps when she sees her son’s body hanging from the rafters, as well as her daughter Siobhan’s furious hatred of being the one who discovered Kevin’s death first rather than Mare, is powerful.

However, the show’s substandard work elsewhere may and does detract from the material. It’s always perplexed me why the priest who confesses to throwing Erin’s bike from a bridge in this episode was ever referred to as a deacon when he’s a priest. It’s almost irritating that the program would put a youngster in danger, Mare’s grandson Drew, with a bathtub drowning storyline that turns out to be a ruse. You’re fucking up if you have to pretend a small child is drowning to keep your suspense scene going.

There are still many unanswered questions in the last episode. What was on the piece of paper or image that Erin’s troubled friend Jess handed the Chief of Police? Why did he feel compelled to contact Mare as soon as possible following that? Who planned to use the rifle in the Ross brothers’ tackle box, and why? Why did the show make things even more complicated by giving their cousin Kenny a different last name than their sibling, despite all previous indications to the contrary? Why is it so difficult to witness the season’s biggest murder-mystery event, which is chock-full of talent from top to bottom?