The Ending Of As Above, So Below – EXPLAINED! 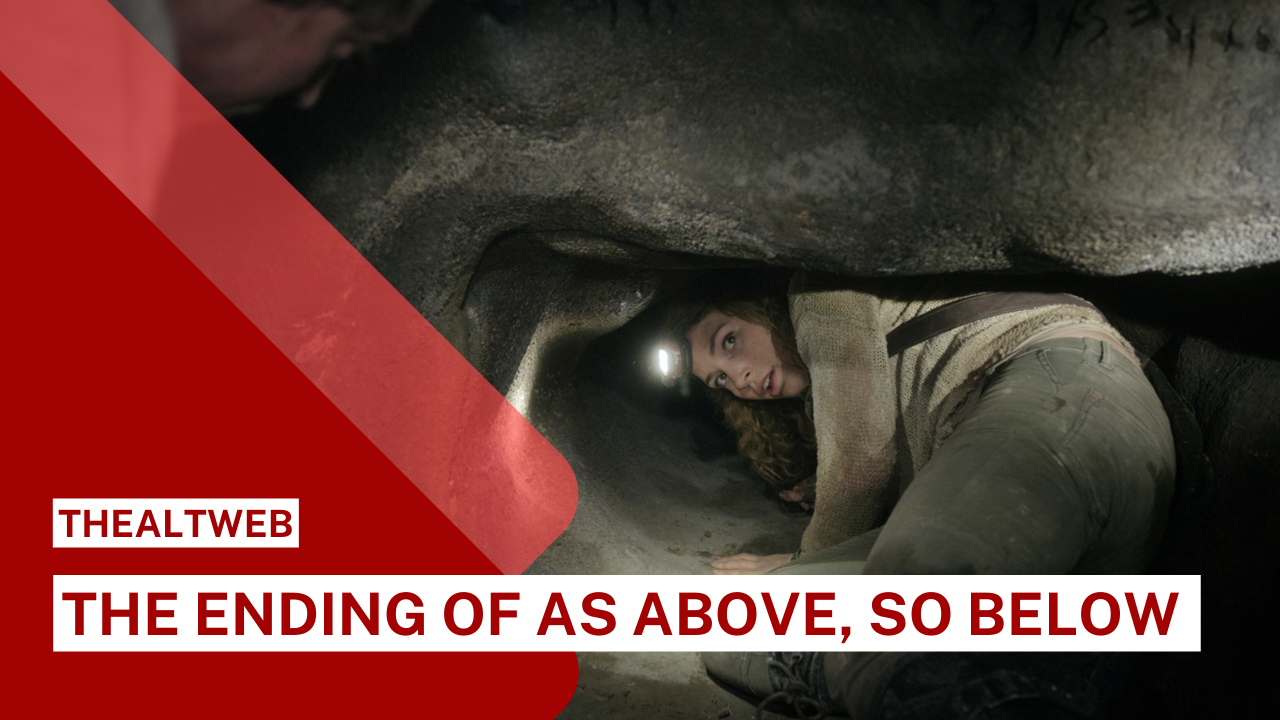 The “found footage” technique of horror movies became extremely popular after the release of “The Blair Witch Project” in 1999, and it is still employed today. The discovered footage method was employed in the 2014 horror film “As Above, So Below,” which depicted a documentary crew’s expedition through the catacombs of Paris in quest of Nicholas Flamel’s famous philosopher’s stone.

Scarlett Marlowe, a knowledgeable and accomplished scholar who is following in her father’s footsteps to find the stone, is played by Perdita Weeks in the film. She is directed to the catacombs of Paris after discovering the “Rose Key” in an Iranian cave, where she believes Flamel’s tomb, as well as the stone and a cache of treasure, is hidden.

AS ABOVE SO BELOW (2014) Ending Explained

Scarlett gathers a group of fellow explorers to accompany her on her journey beneath the ancient city, including her ex-boyfriend and Aramaic translator George, played by Ben Feldman, a cameraman named Benji (Edwin Hodge), and a French guide named Papillon (François Civil), whose name means “butterfly” in English, who brings along his girlfriend Souxie (Marion Lambert) and friend Zed (Ali Marhyar), Together, they explore the bizarre and deadly catacombs, overcoming incredible mental and physical trials in the hopes of finding treasure and glory.

However, not everyone survives their journey through the catacombs.

The “As Above, So Below” finale is detailed here.

The entry to Hell is concealed in the Paris catacombs.

The most crucial (and perplexing) aspect of “As Above, So Below” is how the crew’s journey through the catacombs mirrors Dante’s “Inferno” and his journey through Hell’s nine circles. Scarlett and the others enter Hell when they initially enter the unusual passage in the catacombs, but their presence is confirmed later when they come across the Greek message “Abandon all hope, ye who enter here,” which Dante reads while going through the gates of Hell (Digital Dante).

The crew is pretty well along in their voyage through Hell at this time in the film, so it isn’t a perfect duplicate of Dante’s nine circles, but it comes close.

The horror film contains many aspects that depict the various circles of Hell, beginning with Limbo, where souls are trapped between Heaven and Hell. This is where the group meets La Taupe, Papillon’s companion who had previously explored the tombs but never returned. When Scarlett and the others encounter him, he demonstrates peculiar skills and traits, and they should be concerned about seeing La Taupe there.

Instead, they put their faith in him and follow him down the path that leads to Hell. The party finds the treasure in Hell’s fourth circle, Greed. When they try to break in and take the money, they fall prey to their greed and wind up in a perilous situation.

The group as a whole is put to the test.

The other most prominent circles of Hell are seven, eight, and nine, which represent violence, deception, and treachery, respectively. Papillon, Souxie, and Benji’s fates are determined by each of these factors. Each member of the team is put to the test as they descend deeper into the catacombs, and thus deeper into Hell.

They locate La Taupe again in the seventh circle of violence. Souxie approaches him slowly, which proves to be a fatal error. Souxie’s head is smashed to the ground by La Taupe, who kills her. As you’ll see throughout the movie, each person’s struggles in Hell are the result of a mistake they made earlier in life, a mistake for which they must either accept full responsibility or face death. Although you never learn exactly what Souxie did, you can assume it has something to do with the horrific end she is about to experience. Benji witnesses a heartbroken mother holding a baby before dying.

Scarlett, George, Zed, and Papillon then proceed to the eighth and ninth rings, which deal with deception and fraud, both of which are related to Papillon’s transgression. A flaming automobile with a man inside is found by the group. Papillon is said to have betrayed the man in the past, resulting in his death in a vehicle fire. When Papillon is confronted with it, however, he is unable to accept his guilt, and the image consumes and kills him.

Scarlett, George, and Zed finally get it.

Fortunately, a few members of the group learn the proper lesson, and Scarlett, George, and Zed realize that they must confront their history in order to survive and escape Hell — literally. This is the suicide of Scarlett’s father. Scarlett has images of a hung man and a phone ringing during “As Above, So Below,” which eventually turns out to be a reference to the night her father committed suicide.

Scarlett’s father tried to call her before he died, but she never answered, causing her to feel guilty. Scarlett confronts her past and apologizes to her father for not responding to his call and for failing her test.

George feels guilty because his younger brother died in an accident. George went to obtain aid after his brother’s leg became stuck in something while submerged in water, and he got lost. His brother was still alive when he returned. Zed, a minor character in the film, admits to having a child that he knows is his, but he has yet to claim the child as his own.

The philosopher’s stone is where it all begins and finishes.

Scarlett’s pursuit of Flamel and the philosopher’s stone links the entire plot of “As Above, So Below.” She eventually finds it, but the stone — and the voyage to get there — aren’t quite what she had hoped for. When the party reaches the fourth circle of Hell, greed, they come across a tomb that appears to be Flamel’s, complete with an old but undamaged Templar Knight’s body. They discover the philosopher’s stone in an image on the wall beside the riches – or so they assume. Because the stone is a fake, Scarlett can only treat the others’ wounds once. The stone is a challenge in and of itself.

When the gang reaches the ninth circle after Papillon’s death, George is injured by a creature in the catacombs, but when Scarlett tries to treat him with the philosopher’s stone, she finds it’s a fake and must return it in order to acquire the genuine one. Scarlett completes the assignment by returning via even more difficult circumstances, including a bloody trench. Instead of obtaining another physical stone, Scarlett learns that she has absorbed the stone’s skills, demonstrating that she is worthy of wielding it via her acts and faith in its power. She goes back to George and heals his injuries.