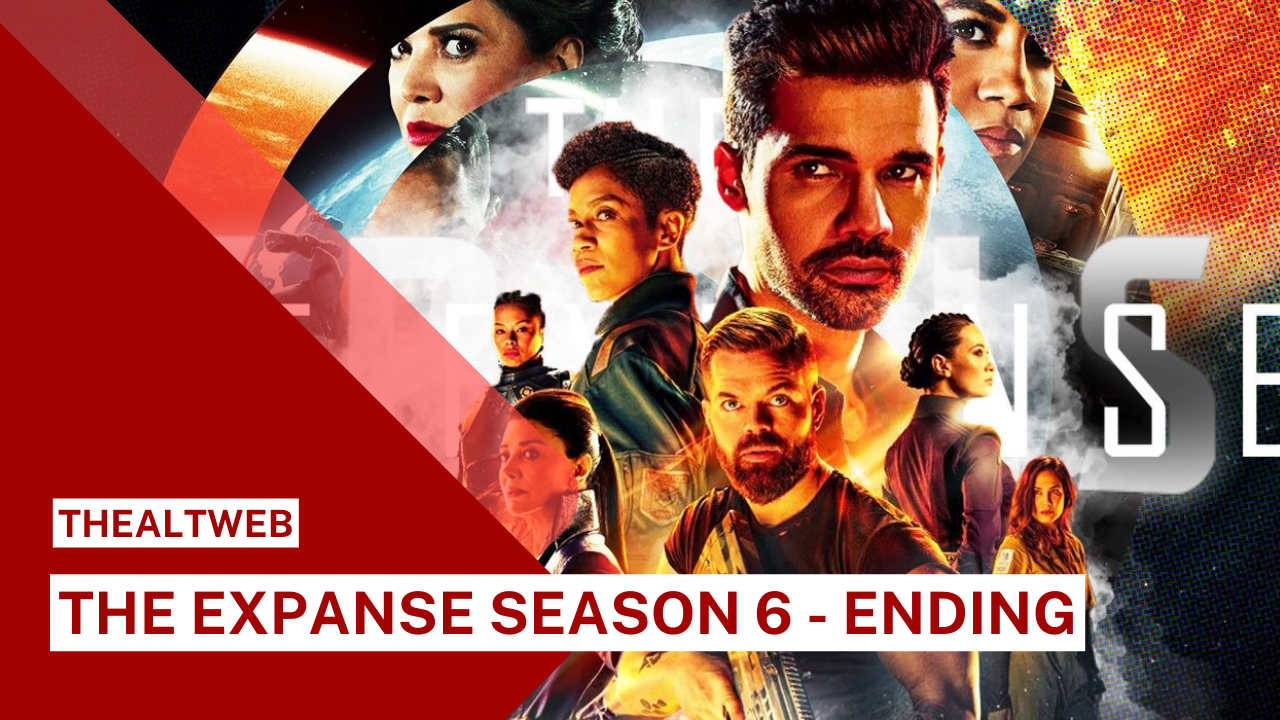 On Prime Video’s “The Expanse,” the Rocinante has completed its final mission. The sci-fi series was regularly one of the sharpest, most engaging shows on TV, spanning two networks, one enormous fan campaign, and six seasons. Despite being set hundreds of years in the future and featuring spectacular space battles and advanced technology, the show spoke to audiences today with its depictions of oppressed people’s trials and the costs of colonization, as well as its examination of what happens when humanity attempts to control the unknown.

In Season 6, the Roci joins the Inner Planets to battle against Marco Inaros (Keon Alexander), a Belter terrorist turned rebel leader whose collaboration with a rogue sect of Martians has allowed him to demolish significant areas of Earth and severely reduce Mars. The fight plays out on both personal and global levels over the course of six episodes, culminating in a nail-biting last battle in a series finale that is far from uncomplicated. We explain what happened in “The Expanse’s” last episode, “Babylon’s Ashes.”

The Finale Of The Expanse Explained

The Alliance devises a strategy.

Camina Drummer (Cara Gee) agrees to join forces with UN Secretary-General Chrisjen Avasarala (Shohreh Aghdashloo) and the Inner Planets in the previous episode of “The Expanse.” The drummer isn’t a friend of the Earthers, but she’s also not a friend of Marco’s. So when Naomi Nagata (Dominique Tipper) arrives to persuade Drummer to talk with Avasarala, she reluctantly agrees, seeing that Marco now offers a greater threat than the Inners she despises.

The drummer is meeting with a coalition from Earth and Mars, which includes James Holden (Steven Strait) and Bobbie Draper (Frankie Adams), who represent the Rocinante, at the start of “Babylon’s Ashes.” Marco’s Free Navy is flying for the Ring’s Medina Station, and the alliance must stop him before he reaches the Ring’s entrance. If he makes it there, he’ll be able to hide behind the rail guns that were put on Medina, giving him control over the cosmos, including the Ring’s hundreds of worlds.

The Free Navy is divided into three fighting groups, with the UN and Martians aiming for the units with the most powerful warships. Drummer and her ragged Belter fleet are tasked with annihilating the smaller group, which is largely made up of cargo ships. Meanwhile, the Roci and a strike squad commanded by Bobbie prepare to seize control of the rail guns at Medina Station in order to use them against Marco if he manages to elude the Inners’ soldiers.

The Pella is revealed.

When Avasarala learns that the Roci’s intelligence has disclosed the position of Marco’s ship, the Pella, the UNN combat group is on its way to the Free Navy. Drummer appears serious as she focuses her attention on the fighting group her fleet is targeting after hearing through the radio that the UNN fleet is about to confront the Pella. UNN 1 fires torpedoes at the Pella, which causes it to fall back. However, Avasarala notes that the Pella does not return fire, and the other Free Navy ships do not fall back to defend it, implying that Marco is not on board.

Drummer’s fleet engages the cargo in the Free Navy battle group they’re battling at the same time. The freighter’s cargo falls away as her fleet fires, revealing the Pella. After Marco shoots Drummer, a gunfight ensues. The drummer is momentarily knocked out by the activity, and when she wakes up, she discovers a massive hole in the side of her ship, the Tynan. Her torpedoes have gone missing, two of her fleet’s ships have gone missing, and the Pella is going back toward them.

Drummer orders her fleet to disengage and prepares to drive the Tynan into the Pella in a last-ditch attempt to stop it, but her comrade Walker is first on the scene. The Pella is severely damaged by the hit and its aftermath, and Marco’s advisor Rosenfeld Guoliang (Kathleen Robertson) dies. Drummer disengages after the combat since she realizes there’s nothing else she can do.

Members of the attack squad, including Amos and Bobbie, are ejected from Giambattista, an ice hauler, as the Rocinante burns toward Medina Station. The Roci is hit, and Clarissa Mao (Nadine Nicole) rushes to repair the damage, but she is knocked unconscious by Medina’s rail guns. The striking team exits their pods as they get close to Medina. Naomi checks on Clarissa, who says she’s rectified the damage, as the Roci moves out of range of the rail guns.

Meanwhile, a torrent of gunfire rains down on the strike squad from above. They receive fire from the ground and the air when they arrive in Medina. Bobbie requests air support from the Roci, but the ship is unable to assist as long as the rail guns remain active. Bobbie urges everyone to fall back as she moves forward, becoming a one-man attack army.

Amos arrives to cover her just when it appears she won’t make it. They’re both pinned down, but the Roci looks to be providing the much-needed air support. Bobbie reveals that she had no option but to deactivate the rail guns as the fight comes to a close. While gaining possession of them was the initial aim, Bobbie determined it was better to knock them out than allow the Free Navy to continue operating them.

A message from Mars

Marco receives a message from Admiral Duarte (Dylan Taylor), one of the masterminds behind the rogue Martian faction that traded Martian technology for the protomolecule sample and scientist Paolo Cortazar (Carlos Gonzalez-Vio) in the fifth season of “The Expanse,” on the Pella, which is still speeding toward the Ring. Throughout Season 6, the first few minutes of each episode reveal a glimpse of what’s going on on the Ring planet Laconia, where Duarte has landed, but we don’t meet him until Episode 4.

Duarte looks up at the sky smugly at the start of “Babylon’s Ashes,” as though he’s satisfied that he’s finally harnessed the protomolecule’s power. As Duarte makes clear in his communication to Marco, he no longer thinks he owes Marco or the Free Navy anything, even the Laconian armaments Marco sought for the conflict the Free Navy is currently engaged in. Duarte’s letter is a big no-no since he not only refuses Marco the weaponry but also advises him to stay away from the Laconia system. Marco was a “good diversion,” according to Duarte, but now he has “gods to murder.” Yikes! We won’t get to witness how Duarte’s quest works out because this is the show’s final episode.

Despite the fact that Marco’s relationship with Laconia has been destroyed, he is still on the verge of winning the fight against the Inners and is formulating plans for when he retakes Medina Station. The Roci is the only thing that stands in his path. Even though they know they don’t have the weaponry to stop him, the team brainstorms ways to stop him. Naomi, on the other hand, has an idea that might put an end to Marco’s career.

Holden notes that some ships vanish without a trace as they travel through the Ring earlier in the season. He tells Fred Johnson in Season 5 that he feels angry entities lurking inside the Ring whenever he goes through it. These, he believes, are the aliens that constructed the Rings and destroyed the civilization that generated the protomolecule. Holden believes that by reading The Lord of the Rings now, humanity is reawakening these malevolent beings. Holden’s study into the missing ships in The Lord of the Rings takes him to Dr. Okoye (Lyndie Greenwood) from Season 4, who tells him that the disappearances are preceded — or possibly be triggered — by a “mass-energy threshold.”

Holden and his crew return to the Roci later, where Bobbie has joined them as their new pilot. When they’re alone, Holden admits to Naomi that stepping down from the transport union enraged a lot of people. She reassures him that he did the right thing and offers a speech on how simple acts of kindness can have a tremendous impact. The tale skips back to the Pella before it entered the Ring as she speaks.

Marco has just delivered a stirring speech to the delight of the team, but Filip isn’t as thrilled as the others. Filip’s limited exposure to his mother’s point of view in Season 5 reveals exactly how manipulative Marco can be, and Filip grows increasingly persuaded that Marco isn’t doing the right thing during the sixth season.

The last blow comes when Marco ignores Rosenfeld’s death, claiming that he and Filip chose to be in this circumstance. Filip, of course, has no option, so he steals a ship and flees from the Pella and his father while Marco distracts his troops with flowery words. The fact that he fills in Filip Nagata instead of Marco’s last name while naming himself as the ship’s owner is very noteworthy.

Holden begins to plan their next movements on the Roci, but Naomi interrupts him, urging him to take a breath before they go on a new adventure. This takes the concert to a peaceful close, but one that is yet full of potential.