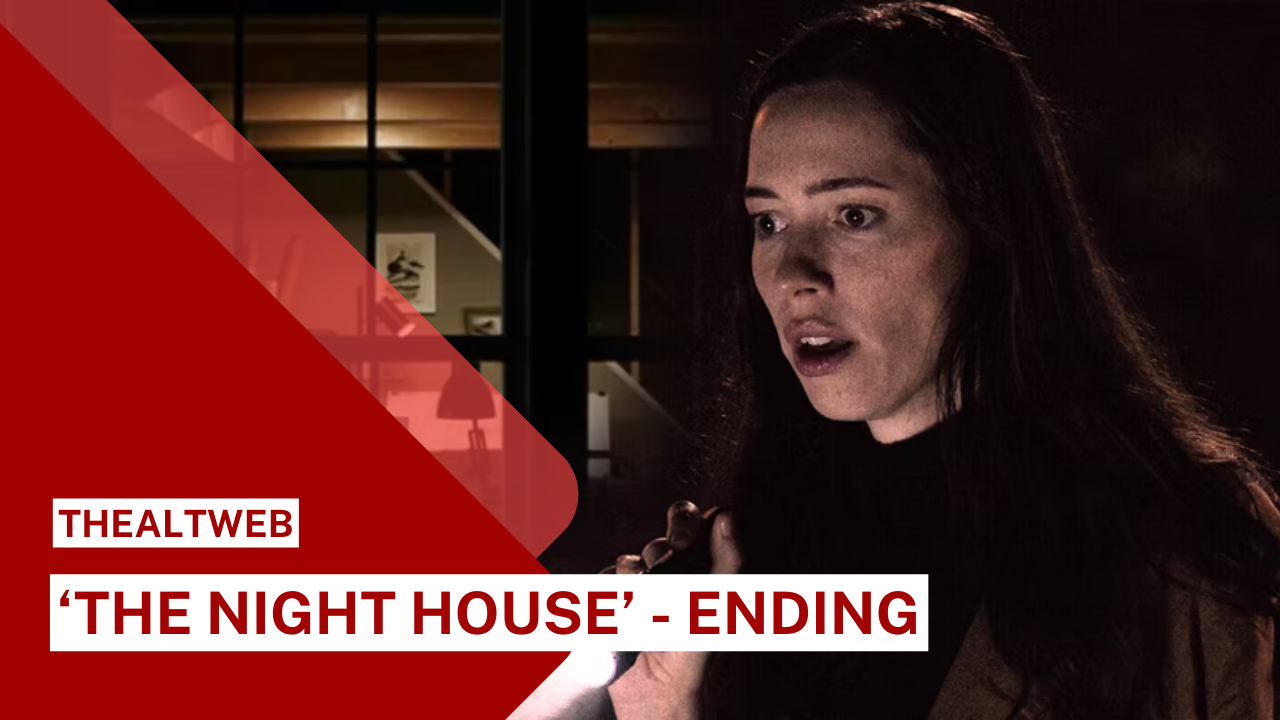 It’s easy to misunderstand what The Night House is about, even if you’ve watched the trailer. It may appear to be a doppelgänger film at first glance, but it isn’t. Furthermore, the entire film is an atmospheric mystery in which the spectator, like Beth (Rebecca Hall), is attempting to figure out why her husband, Owen (Evan Jonigkeit), committed suicide and why she is seeing unsettling visions in the house he created for them.

As the novel progresses, we find that Beth was in a car accident when she was young, that when she awoke, she had been legally dead for four minutes, and that all she remembered from her death was nothing. She only informed Owen about it, and when he died, he left a note confirming that there was nothing, which isn’t exactly a happy or informative farewell, though he does say Beth “is secure now.”

We find out how this terrible universe has been working towards the film’s conclusion. Owen constructed a “caerdroia,” a mirror replica of the home, to capture the evil spirit that had been after Beth since her death. “Nothingness” takes the form of anything in The Night House. It’s a dark force that bent Owen to its will, and he tried to fight it by using dark arts to keep it at bay, so he built the “night house” on the other side of the lake, and when that didn’t work, he started killing women who looked like Beth in the hopes of fooling the nothingness, which it admits it did for a time. But now that Owen is gone, Beth is surrounded by emptiness, and she is only saved at the last minute by the screams of her friend Claire (Sarah Goldberg), who pulls Beth back to life and saves her from suicide.

It’s crucial not to get caught up with The Night House’s “how.” Yes, the film attempts to establish rules, but it isn’t a supernatural horror thriller. The Night House, on the other hand, is more of a psychological thriller. That final shot is crucial because the nothingness that stalks Beth may easily stand in for melancholy or tragedy.

The shadow of the “nothingness” can be seen on the lake, and it serves as a warning that this darkness will never fully vanish. It’s something Beth will have to be aware of and combat for the rest of her life, which is all too common for those who suffer from depression or trauma. We prefer to believe that these issues can be “fixed,” but in truth, they are a never-ending struggle.

So, what role does Owen’s tale play here? The plot of The Night House is about how everyone fights their own inner wars, and what’s so heartbreaking to Beth is that her husband was suffering (and it turns out, suffering because he thought he had to protect her) and she missed it. That type of harm is psychological rather than magical, which is why The Night House is so effective. It’s not so much about some supernatural power from beyond as it is about what that energy symbolizes and how it manifests itself in our life. The emotional stakes and subtext provided by the film take precedence over the laws of emptiness and caerdroia.