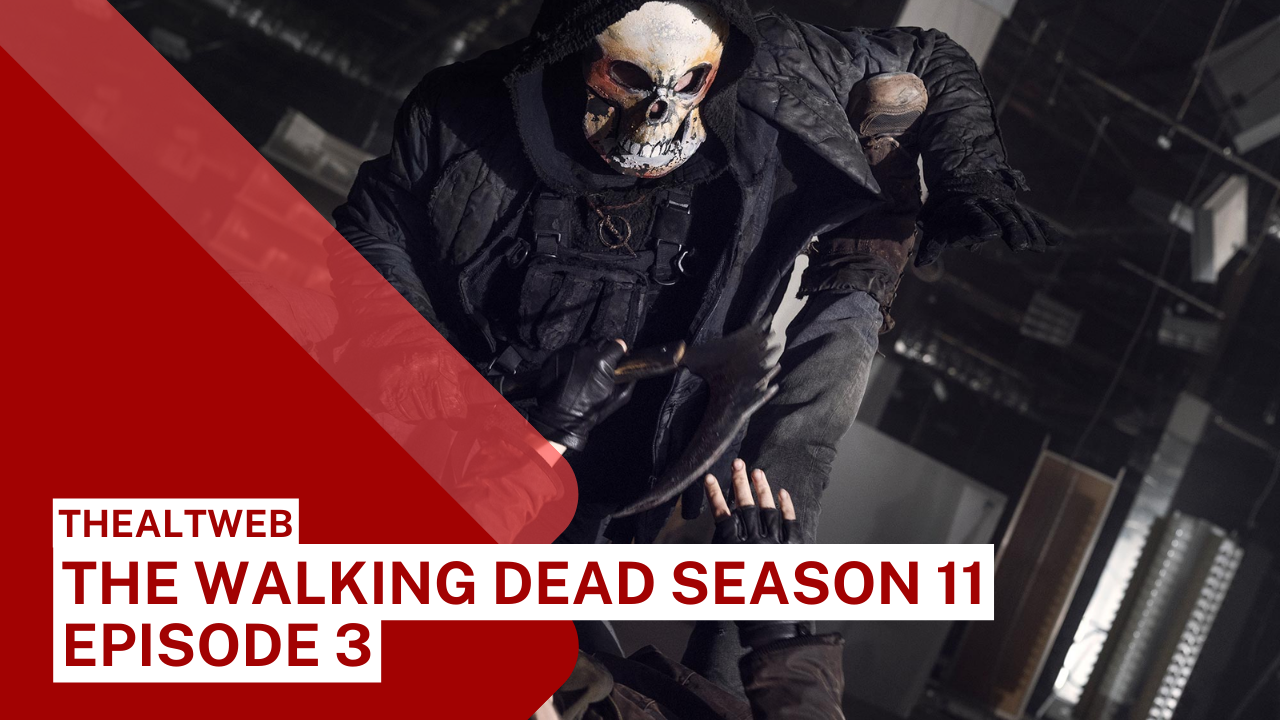 While the enigmatic titles of “The Walking Dead” Season 11’s first two episodes, “Acheron Parts I and II,” allow space for interpretation, the title of episode three goes right to the point. “Hunted” is a violent episode in which many of our protagonists physically and emotionally flee for their lives.

Maggie’s (Lauren Cohan) party was ambushed by a battalion of Reapers after negotiating a dangerous underground tunnel during the first two episodes of the season. During the night, members of her gang were killed, maimed, and scattered. Maggie was still on the run when we caught up with her, and no matter how much ground she traveled, the disguised menaces appeared to be everywhere.

In this episode, there was also a new kind of hunting going on. While Maggie’s squad met violent opposition on their journey to secure supplies from Meridian, the situation in Alexandria remained grave. Carol’s most pressing concern among the various disasters that befell the survivors was the disappearance of the community’s horses (Melissa McBride). Without the horses, plowing fields and finding new foraging sites will be difficult. She headed out to find the creatures and, naturally, picked up a few lessons along the way.

In “Hunted,” everything came to a close like this.

The Reapers have persisted as a distant, scary threat on the perimeter of the story since we first heard about them in the Season 10C premiere “Home Sweet Home.” We know they overtook Meridian and are notorious for their ferocity, but we don’t know much else about them. “Hunted” offered us a little more information on that.

Father Gabriel (Seth Gilliam) finds an unmasked and mortally wounded Reaper reclining against a log the morning after the ambush. While the man is bleeding out, he silently recites a Bible scripture.

Father Gabriel, on the other hand, does not see it that way, and instead of praying for the fallen Reaper, he strikes him down. We learn later in the show that this particular Reaper’s religious zeal isn’t an outlier.

Maggie, Negan (Jeffrey Dean Morgan), and Alden (Callan McAuliffe) come to encounter a scorched walker stuck to a tree while traveling through the woods. The image is stunning, especially when the group glances up and notices a sign above the corpse’s head that reads “JUDAS.” The Reapers aren’t explicitly stated as the perpetrators, but they appear to be the most plausible suspects.

Of all, Judas is a Biblical character associated with betrayal, and we may assume that whoever this walker was turned on the Reapers and died horribly. There’s still a lot we don’t know about the Reapers, but “Hunter” seems to hint that they’re some type of religious extremists with an especially harsh interpretation of Christianity.

Carol enlists the help of Magna, Kelly, and Rosita to complete a mission.

The episode’s other major plotline allowed us to spend time with a couple of characters we haven’t seen much of since the end of the Whisperer War. Carol enlists Magna (Nadia Hilker), Kelly (Angel Theory), and Rosita (Christian Serratos) to assist her in her quest for Alexandria’s missing horses.

Magna and Kelly are still hurting from Connie’s suspected death (Lauren Ridloff). However, their differing perspectives on the loss have caused a minor schism between the friends. Magna is in the process of moving on, but Kelly feels Connie is still alive. Magna notices Kelly sliding away from her numerous times throughout the episode, most likely as a coping tactic to keep her hope for Connie’s return alive.

Meanwhile, Rosita discloses that she’s been experiencing dreams about her long-dead ex-boyfriend Abraham (Michael Cudlitz). She thinks he’s trying to communicate with the Alexandrians from beyond the grave: “I’m aware that it’s crucial. I’m obliged to do something.”

While his message isn’t immediately evident to her, it’s something to keep in mind as the season progresses. Abraham has been in dream or hallucination form several times after his murder by Negan in the Season 7 premiere, so fans of the character might see Cudlitz make an appearance if this storyline continues.

Invoking Abraham’s name, we have to question whether it’s creating the framework to pull Rosita into the current Maggie and Negan storyline, given she has a lengthy history of wanting Negan dead as well. However, with Maggie and Negan’s relationship becoming more complicated by the day, it’s unclear how Rosita will fit into that dynamic.

What the horses stand for

Carol’s assignment to apprehend Alexandria’s stray horses has all the characteristics of a Carol mission. Despite the fact that many people have told her that her plan is unrealistic, she is dead determined on seeing it through. However, capturing the horses proves to be a difficult task because the animals flee whenever they are approached. Carol doesn’t get any results until she tries a fresh method.

Kelly says that after they’ve surrounded the horses in a paddock, they try to let the animals approach rather than actively pursue them. The horses quiet down as soon as the gang sits down their lassoes.

Carol is possibly the most determined of all the characters you could call “determined.” However, she realizes that occasionally there is a solution that does not require confronting an issue head-on until it submits. A quiet attitude is sometimes the best.

When they return, she gets a similar lesson. Carol is pulled aside by Magna, who tells her to stop doing whatever she’s doing to give Kelly false hope that Connie is still alive. Carol’s grief over her role in Connie’s disappearance has been apparent, and it’s no surprise that Magna believes she’s dealing with it the same way she deals with the rest of her problems. Magna wants Carol to quit attempting to make sense of her loss by intentionally creating hope that Kelly’s sister’s death was not caused by her actions.

Carol hears her say, “You don’t believe Connie is still alive. You simply cannot accept the implications if she is not.”

However, we the viewers are aware that Connie is still alive, and there’s little doubt that Magna’s coping strategy of moving on aggressively and expecting everyone around her do the same will be tested when Connie emerges.

“Hunted” gives viewers a glimpse into the life of some of Alexandria’s younger citizens while the adults are away on their various missions. Judith (Cailey Fleming), Hershel (Kien Michael Spiller), R.J. (Antony Azor), and Gracie (Anabelle Holloway) are shown playing cards and gossiping about the grown-ups in an early scene in the episode.

This season is all about community, and the kids are living proof of why people like Maggie and Carol value it so much. Alexandria has no future without those children, and the children are unlikely to have one without Alexandria.

Later in the episode, Carol demonstrates her commitment to this cause. While the majority of the horses brought up will be used for labor, Carol takes one that appears to be limping into a stable and slices its throat. She sobs while doing so, but her lack of hesitancy demonstrates that her own sentiments are unimportant. We see the kids again in the next scene, this time comparing notes on the plate of roasted horse meat they’ve just been fed.

The adults are doing their best to give these children some hope for the future in order to shield them from the depressing fact that the future is uncertain.