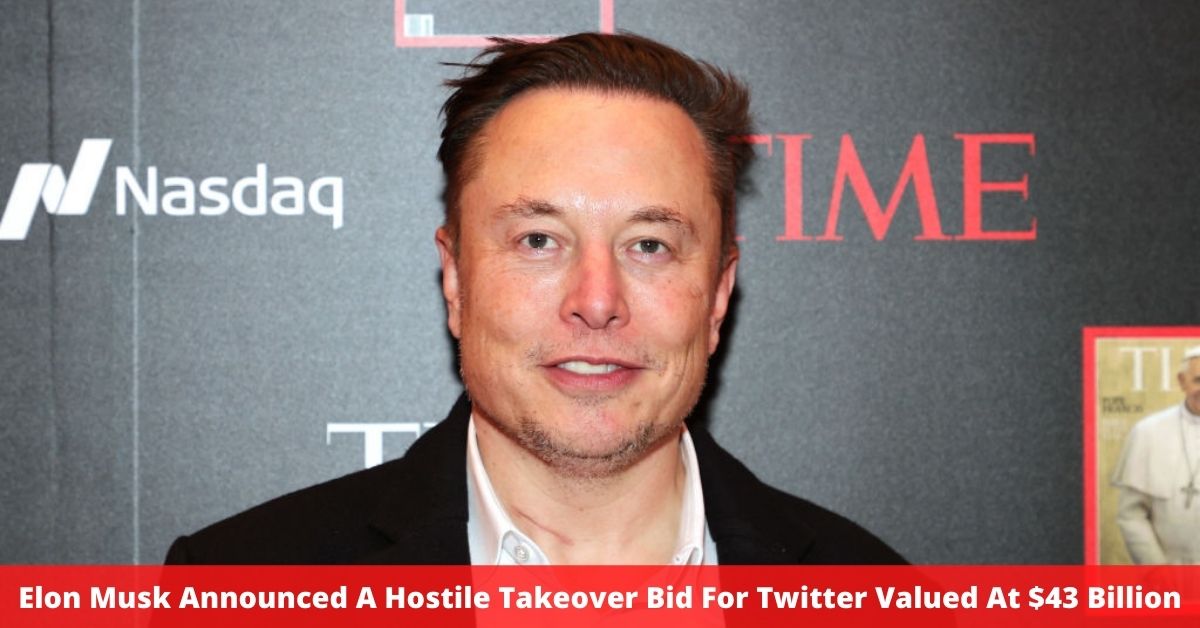 Elon Musk has officially made a bid to buy Twitter Inc, the firm that owns the microblogging social media site Twitter, putting an end to all speculation. According to sources, Elon Musk, the CEO of Tesla and SpaceX, has offered $54.20 per share in cash for 100 percent of the company’s stock, valuing the deal at around $43 billion.

In a filing with the US Securities and Exchange Commission on Thursday, the world’s richest man detailed his hostile takeover offer for the corporation. Following the announcement, Twitter’s stock jumped 18%.

Elon Musk had previously announced that he had purchased a 9.2 percent interest in Twitter, sparking suspicion that he may take the firm over. He was offered a place on the board of directors of the company because of his shareholding, which he first accepted. He eventually changed his mind and opted not to join the board.

One of the terms of his nomination to the board was that he couldn’t grow his investment in the company beyond 15%. He is no longer bound by such constraints as an independent investor, and has made his offer to buy the entire stock of Twitter.

Also Read: Apple CEO Tim Cook does not want you to sideload apps onto your iPhone

Musk stated in a letter to Twitter board chairman Bret Taylor that he invested in Twitter because he believes it has the potential to promote free expression around the world, and that he believes free speech is a fundamental requirement for a functioning democracy.

“However, since making my investment I now realize the company will neither thrive nor serve this societal imperative in its current form. Twitter needs to be transformed as a private company,” he said in the letter.

He stated that he was making his offer “As a result, I am offering to buy 100% of Twitter for $54.20 per share in case, a 54% premium over the day I began investing in Twitter and a 38% premium over the day before my investment was publicly announced”. He went on to say that his offer is the best and final offer he has ever made, and that if it isn’t accepted, he will have to reconsider his position as a shareholder.

He said, “Twitter has extraordinary potential. I will unlock it”.

Musk later tweeted a link to the SEC filing, writing, “I made an offer.”

Elon Musk, as the world’s richest man, has the financial means to purchase 100% of Twitter’s stock. It will be interesting to observe how the Twitter board of directors and management respond to his offer. However, if the board of directors declines, he can buy all of the Twitter shares on the market, gaining enough shares to take over the board. For the buyout, Musk has chosen Morgan Stanley as his adviser.

Also Read: Do you have a huge desire for the new MacBook Air – We’ve Got awful news for you

While Musk’s offer price is higher than recent stock prices, it is lower than the company’s high pricing. Because Twitter’s stock exceeded $77 just last year, some stockholders may be unwilling to sell at $54.20, causing the deal to fail.