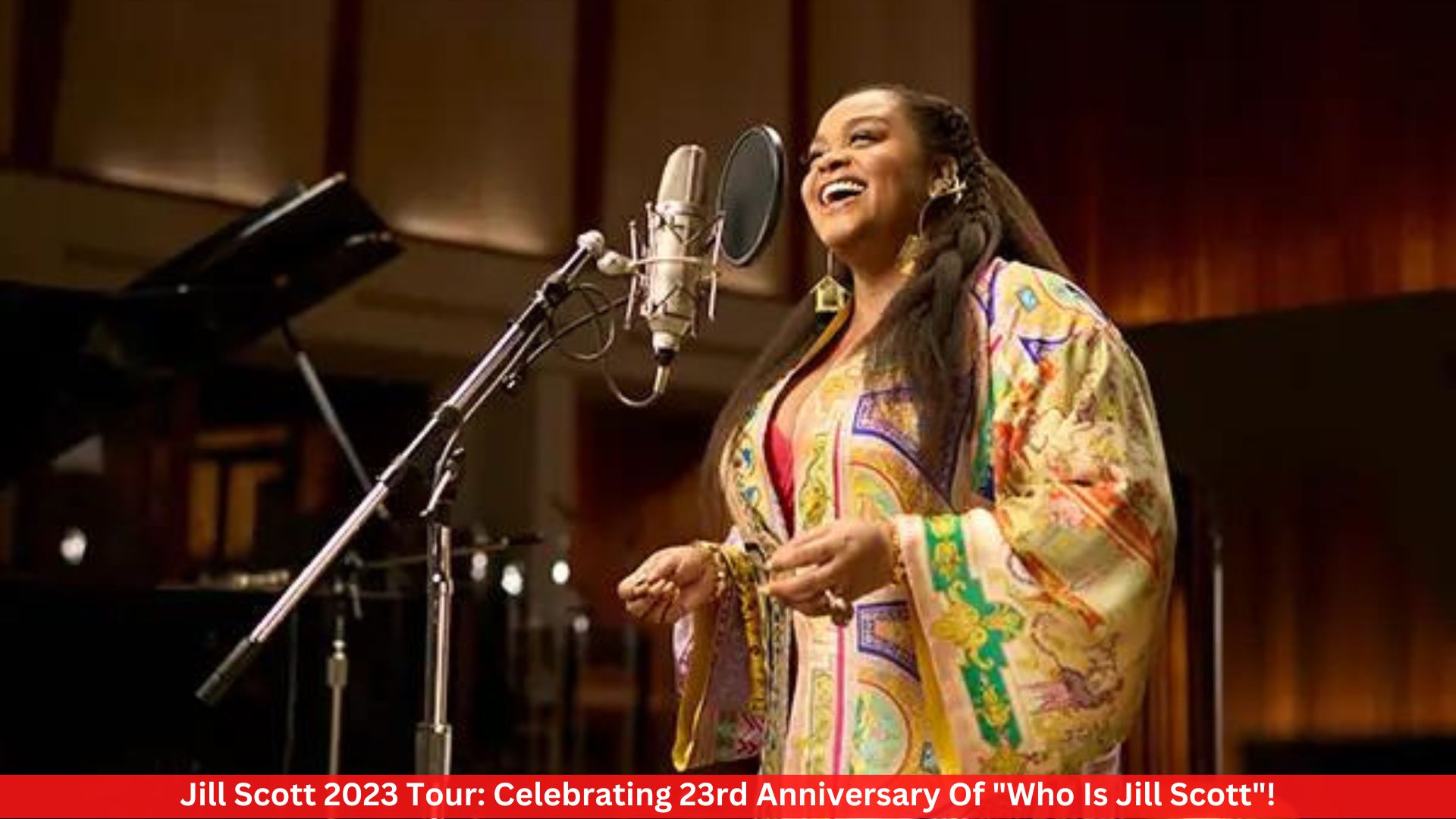 Jill Scott is about to go on her long-awaited 23rd-anniversary tour with her exciting new album “Who is Jill Scott.” Jill Scott is an American singer and songwriter who is known for being unique and sophisticated. She has a lot of fans all over the world. She was all set to go on tour in 2020, which would have been her 20th year in business.

But unfortunately, she had to cut short her program when the Covid 19 came out of nowhere and was very strong. So, now that she has taken a break from the tour, she is ready to have a great time on her 23rd anniversary. So, let’s look at the tours in more detail.

Sources say that Jill Scott’s long-awaited world tour will be called “Who is Jill Scott? Words and Sounds, Volume 1”. Fans all over the world no longer have to wait any longer. Jill Scott said, “Three years ago, my band and I were so excited, but that stupid covid made us stop. We are now outside! Come see me. Come back and feel. Relive your favorite moments. Are you all ready to stop arguing and get on with it?! It’s a very loving place.”

She said this very strongly, and now that her words are all over the internet, people are very excited and can’t wait to see her concerts.

Jill Louise Scott is an inspiring American soul singer, songwriter, model, and actress. She was born on April 4, 1972, and is now in her fifties. Who Is Jill Scott?, her most famous first album, came out in 2000.

Her first movie was Hounddog, which came out in 2007. She was also in Why Did I Get Married? She also played a lead role in the BBC/HBO show The No.1 Ladies Detective Agency. The show was based on a book by Alexander McCall Smith with the same name.

Also read: What Was Kirstie Alley Net Worth?

In terms of her career, she first worked as a teacher’s aide, but she eventually quit college and started focusing on her skills. Jill Scott started out as a spoken word artist, and she got to perform at a few live poetry readings. So Ahmir Questlove Thompson was her ace in the hole. He asked her to join the band in the studio, which would give her more attention than she needed. She is now married to her long-term boyfriend, Lyzel Williams. But it was a shock when, after being married for six years, they decided to split up and got a divorce in 2007.

Later, Jill Scott told the world that she was getting married to her drummer, Li’l John Roberts. The two of them have a son named Jett Hamilton Roberts. But after a few years, they said they were no longer together.

The 23rd Anniversary Tour Dates And Details About The Event!

Jill Scott used her Instagram handle to announce tour dates and details about the event. So, according to the sources, the tour will start in Augusta, Georgia, on February 28, 2023, and they plan to go to more than twenty places in total. On June 22, 2023, the tour will come to an end in Los Angeles. So let’s take a look at the full list of places and dates.

How To Get Tickets For Concerts?

So Jill Scott’s concerts, which have been talked about for a long time, are about to happen. So that people all over the world can reserve their seats, as the concert tickets will go on sale next Friday, December 9, at 10:00 am local time.

Also read: Does Darci Lynne Have Cancer? All You Need To Know!

Also, tickets for the concerts would be on sale before the public on Tuesday, December 6, 2022. So, fans who are eagerly waiting for tickets and find the singer interesting can get them from the singer’s official website.

So, when we came back to the tour event, Jill Scott asked her fans if she should continue with the tour program she had stopped. So, last week, she asked her fans on Instagram, “Should we do some “Who is Jill Scott?” posts?” shows for the 23rd anniversary? Just click on the link in my bio and tell me where you want me to play. You’ll be the first to know when tickets go on sale, new music comes out, or merchandise goes on sale.

So, she was blown away by how many positive responses she got, and she decided to go on her one-stop tour, which stops in several cities across the country. So, she said, “Thank you so much, I’m going to do it,” in response to all the positive comments. “Who Is Jill Scott?” is back on the road for its 23rd anniversary. Tour”.