Harry Potter Cast Members That are No More Alive! 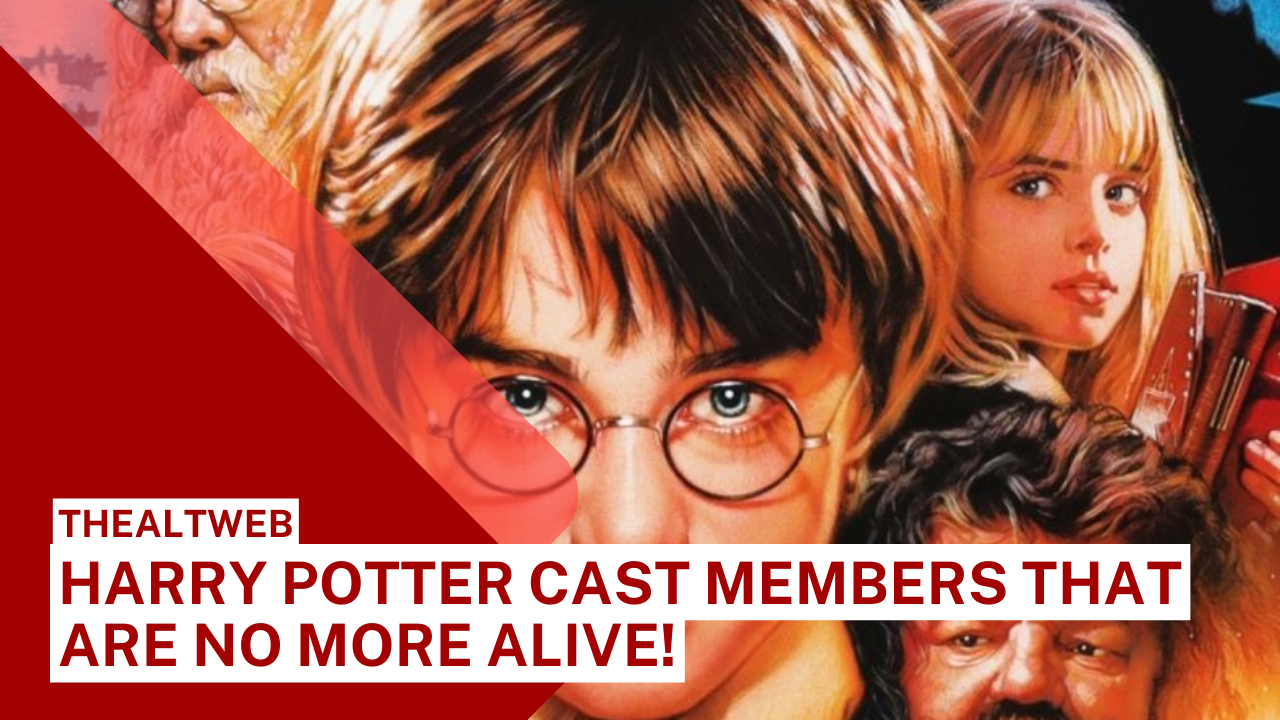 Following the success of the first series of Harry Potter novels in the late 1990s, a cinematic adaptation seemed inevitable. Harry Potter and the Sorcerer’s Stone (known as Philosopher’s Stone outside of North America) was released in 2001, kicking off a decade-long Potter marathon in cinemas and at box offices throughout the world.

The younger actors in the Potter franchise were supported by some of England’s finest actors, including Dame Maggie Smith, Michael Gambon, Jim Broadbent, Emma Thompson, and more, with child stars Daniel Radcliffe, Emma Watson, and Rupert Grint leading the films like Harry Potter and his two best friends Ron and Hermione.

However, certain members of the cast tragically died during and after the ten-year run of the Harry Potter film series, and whether these performers left admirers behind during the franchise or after it ended, their deaths grieved Potter fans. Here’s a list of Harry Potter cast members who have passed away, ranging from Potions masters to Ministry officials and magical creatures. There will be Harry Potter series spoilers in the following paragraphs.

Harry Potter meets his professors as soon as he arrives at Hogwarts School of Witchcraft and Wizardry and immediately clashes with Severus Snape, the school’s Potions master. Snape unfairly antagonises Harry and his friends throughout the series, deducting points for minor infractions and favouring students from Slytherin House (of which he is the head), and their animosity only grows when Snape is forced to teach Harry the art of Occlumency, which could help Harry block Voldemort’s mind. As a childhood friend of Harry’s mother Lily, Snape was always in love with her and became a triple agent between Voldemort and Harry while constantly risking his life.

Alan Rickman was an excellent choice for the role of the mysterious and enigmatic Snape, who turns out to be one of the most complex characters in the series. Rickman breathed life into this character, becoming a beloved figure among millions of Potter fans, making his untimely death all the more tragic. Rickman died of pancreatic cancer in 2016, and fans, fellow actors, and co-stars paid tribute to him in a variety of ways, including heartfelt messages and shrines at key Potter-related locations.

Richard Harris played Albus Dumbledore, Harry’s wise and caring mentor throughout the series, to absolute perfection in the first two Harry Potter films. Harry’s makeshift father figure and personal teacher, Dumbledore, is a gentle giant whose kindness is never diminished by his incredible power. As Harry grows older, he shares his boundless wisdom with him. When Dumbledore appears to be murdered at the end of the sixth instalment, Harry Potter and the Half-Blood Prince, Harry is left to face Voldemort on his own, armed only with the lessons Dumbledore taught him along the way.

Although Dumbledore does not die until the sixth film, the first Dumbledore died after only the second instalment. Harris was diagnosed with Hodgkins’ disease in 2002 after working on two Harry Potter films, and he died in a London hospital after being hospitalised with pneumonia. While Michael Gambon took over as Dumbledore, Harris’ legacy lives on through his sons, one of whom is acclaimed actor Jared Harris, who has appeared in shows such as Mad Men and Chernobyl.

The Dursleys, a trio of extended family members with whom Harry spends an incredibly unhappy childhood, are the source of much of Harry Potter’s adversity during his pre-Hogwarts years. After his parents are killed by Voldemort, Harry is forced to live with his mother’s sister, Petunia, her horrible husband Vernon, and their horrible son Dudley, all of whom despise Harry for his magical abilities and try to make his life as difficult as possible. Despite their mutual hatred, Harry is forced to visit the Dursleys every summer when Hogwarts is closed, making them important characters in the story.

As a result, when it came time to cast the Dursleys, producers saw fit to cast Fiona Shaw and Richard Griffiths as Petunia and Vernon, respectively, two British stage and screen titans. Griffiths collaborated with Daniel Radcliffe on stage in Equus from 2007 to 2009 on both the West End and Broadway, but their collaboration was cut short far too soon. Griffiths died in 2013 as a result of heart surgery complications. Following the death of his friend and co-star, Radcliffe gave a moving tribute to the legendary actor, saying he was “proud” to call him a friend.

John Hurt was one of the most well-known actors to appear in the Harry Potter films. While shopping in Diagon Alley, Harry meets the mysterious and enigmatic Ollivander, the man who supplies wands to the entire magical community, and he tells him a key detail about his own wand. The wand that has been chosen for Harry shares a core with Voldemort’s, creating a lifelong connection, thanks to a magical bond between Harry and Voldemort. Later, in order to finally defeat Voldemort, Ollivander must assist Harry in uncovering the secrets of the Elder Wand.

Hurt appeared in several Harry Potter films, including the first and last, but you may also recognise him from Alien, Midnight Express, Hellboy, V for Vendetta, Indiana Jones and the Kingdom of the Crystal Skull, Doctor Who’s War Doctor, and more. Hurt was made a Knight of the Order of the British Empire in 2015 for his contributions to drama, but he died from pancreatic cancer complications only a few years later, in 2017.

Harry’s time at Hogwarts was full of whimsy and mischief, thanks in large part to the school’s resident poltergeist, Peeves. Peeves spend his entire existence antagonising students and faculty alike, as well as playing inconvenient pranks. Sadly, despite how entertaining Peeves’ exploits would have been onscreen, his scenes were cut from the film franchise.

After Rubeus Hagrid (Robbie Coltrane) introduces Harry to the magical world, Hagrid takes him to Diagon Alley, the magical street where witches and wizards can buy everything they need for spells, potion-making, and more. Harry discovers the Leaky Cauldron — a pub that appears to go completely unnoticed by non-magical people — on an otherwise unremarkable Muggle street in London, and in the backyard, wizards can gain access to Diagon Alley by tapping one specific brick in a wall. Tom is one of the series’ most important background characters, as the bartender of the Leaky Cauldron.

Tom was only in the first film and was played by Derek Deadman, a British actor. Deadman appeared in a number of high-profile projects throughout his career, including Brazil, Robin Hood: Prince of Thieves, National Lampoon’s European Vacation, the Doctor Who serial The Invasion of Time, and the Bond film Never Say Never Again. Deadman died of diabetes complications in 2014 at the age of 74, leaving the Leaky Cauldron unmanned for the time being.

Voldemort has a lot of bad guys under his control, including the dangerous werewolf Fenrir Greyback, so the world of Harry Potter isn’t all heroes. Greyback is a ruthless and hungry monster who bites for fun to create a new army of werewolves, and as a half-man, he finds refuge in Voldemort’s cruel misfits’ army. Greyback attacks the eldest Weasley son, Bill (played by future Star Wars star Domhnall Gleeson), in Harry Potter and the Half-Blood Prince, killing Harry and his family. Greyback survives until the end of Deathly Hallows: Part 2, but the good guys eventually defeat him.

Dave Legeno was perfect for the role of Greyback, which required a powerful actor. A well-rounded mixed martial artist who knows muay Thai, judo, boxing, and Brazilian ju-jitsu. Legeno died in Death Valley in 2014 while on a hike; his body was discovered and it was determined that he died of heat exhaustion.

Harry Potter and the Goblet of Fire, the fourth instalment in the franchise, finds Harry facing an entirely new challenge when his name is accidentally entered into the champion-choosing Goblet of Fire for a multi-school Triwizard Tournament, much to everyone’s dismay. He meets a lot of Ministry officials throughout the tournament, including Barty Crouch Sr., a strict, high-ranking Ministry director in charge of the tournament’s day-to-day operations. Crouch’s son, Barty Crouch Jr. (played by David Tennant in the film), was previously arrested with a group of Death Eaters and has returned with Voldemort’s help to exact revenge on his father.

Gringotts, the vast wizarding bank that holds some of the magical world’s most closely held treasures and secrets, is one of Harry’s first stops when he enters Diagon Alley for the first time. Gringotts is guarded by goblins, who are the most mysterious and cryptic magical creatures in Harry’s world, and Griphook is one of the first goblins Harry meets, leading him down into Gringotts’ dark and well-guarded vaults.

Though Griphook appears in later films, he is played by a different actor as the series progresses; Verne Troyer plays the prominent goblin in the first film. Troyer has a lengthy film and television resume, but most people associate him with Mike Myers’ Dr Evil in the Austin Powers franchise as Mini-Me. Troyer died tragically in 2018 of alcohol poisoning, which was ruled a suicide; however, his roles in films such as Harry Potter and Austin Powers will live on forever.

On every level, Harry is astounded by the magic at Hogwarts when he first arrives. Food appears on tables as if by magic, he can make anything happen with a wave of his wand, the stairwells change frequently, and, in an unsettling twist, the paintings on the walls move and talk. When a portrait of a deceased witch or wizard is painted, a piece of their consciousness is preserved in the painting, allowing everyone from past Hogwarts headmasters to loved ones to communicate with the living long after they’ve died.

Narcissa Malfoy — played by Helen McCrory of Peaky Blinders — didn’t have the most physical presence in the Harry Potter films as the matriarch of the wealthy and imperious Malfoy family, but she was a crucial character nonetheless. Despite her outward support for Voldemort and his henchmen, including her Death Eater husband Lucious (Jason Isaacs), Narcissa has only one concern: Draco Malfoy’s safety (Tom Felton). Finally, when she is asked to confirm that a very much alive Harry is dead after Voldemort tries to vanquish him for all time, she lies to her master in exchange for information about Draco’s whereabouts in the battle, demonstrating that her love for her son always comes first.

Sadly, the woman who brought Narcissa to life died in April 2021 as a result of cancer complications, according to her husband, fellow actor Damian Lewis (Homeland, Billions), who confirmed her death on Twitter. Despite the fact that McCrory was only fifty-two years old when she died, she had a promising career ahead of her, and Potter fans will never forget her scene-stealing performance as Narcissa.