‘Human Satan’ A Body Modification Fanatic, Cuts Off His Ears And Nose 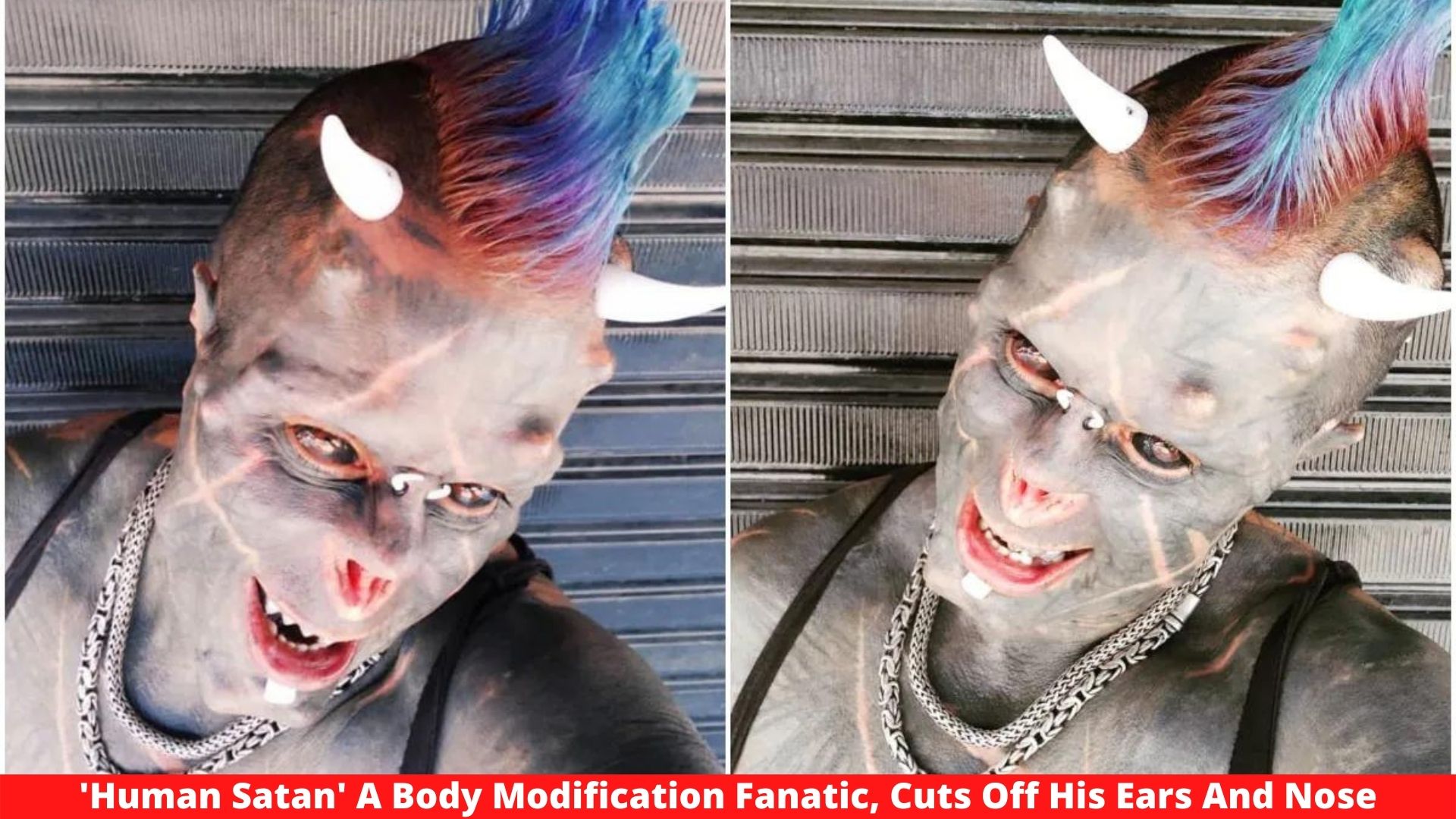 Due to his severe body alterations, a guy known as the “Human Satan” has removed his ears to mark the end of the Covid mask mandate.

Michel Faro do Prado, a Brazilian has undergone substantial body modification over the years, including dozens of tattoos and piercings, as well as customizing his teeth to complete his devilish appearance.

After Brazil lifted its mask mandate implemented in response to the coronavirus pandemic, the tattoo artist lopped off his ears.

On the social networking site Reddit, a photo of the man known as “Diabo” in his native nation was posted, showing off his new look, which included the removal of his ears.

Many commentators were taken aback by his behavior, with one simply commenting, “WHAT!?!?”

Others used the opportunity to crack a joke or two, such as “Hope he doesn’t get an AirPods or earphones this Christmas,” as one user put it.

Another questioned whether it was simply unworkable, saying, “That’s going to be a b***h.” He understands that ears have a purpose other than holding on to a mask, right?”

“I just don’t comprehend how someone can transform their body to this point,” a fourth individual commented. There is no turning back now. You’ll still have scarring and disfiguration if you try to cure it. You’ll never look the same again, and you’ll have to live with it for the rest of your life.”

One individual attempted to justify his behavior.

“The objective is to not appear as you looked before,” one commentator said in a lengthy article. People who do this many alterations are aiming to go as far away from their original appearance as possible, thus the more different they look, the more relief they feel.

Also Read: What Is Instagram Favourites – Who Can See It And Is It Private?

“I would never do something to this extent since I generally like how I look now, but that hasn’t always been the case, and I can see how someone feels in this situation.”

“It helps that I have a few major tattoos now, and I’ve realized that I love certain portions of my body a lot more than I did before they were tattooed, so it gives me an idea of the mindset.”

Michel, from So Paulo, declared in 2020 that he has a high pain tolerance and isn’t put off by the prospect of undergoing even more pain in order to obtain his devil body of dreams.

In fact, he claims that he “suffers a lot more” after procedures than during them, adding, “The truth is that there are alterations that would be nearly impossible to accomplish without anesthetic.”

“If I have to go through suffering in order to attain my goals, I will!”

Michel often receives stares from people in public and is well-known in his town, taking pride in his nickname of “the human Satan.”

Michel said: “I believe that the true image of the ‘devil’ is beautiful, the Bible says this in Genesis and also the same way in the book of Isaiah, which says that says that Jesus was ugly and that he looked like a dry root in the desert. “

“He did not inhabit any beauty, so if it is a matter of fiction that the Devil looks like me more, in my heart I prefer God and doing good!”

He added that people who hear him speak of his love for God are often shocked and confronted by how he looks, however: “I believe in who I am – my family and I are loved by the majority.”

Although he has an unusual appearance, Michel’s family and friends have always been supportive of his endeavors.

It’s a favorite of his family, including his wife and son, as well as other people in his life who have become part of his family.

I don’t care what people think about me; all I want is respect.”

Michel’s goal is to become his wife’s work of art, as she is an expert in body modification and has helped him acquire the look he has already achieved. ‘

He explained that his exterior “has evolved because of what I am and what I am becoming,” which allows him to continually break the pattern and express his genuine self.

The “internal freedom” he has to challenge the “paradigms and conceptions” placed on us by society,” he explained, is symbolized by his physical appearance.