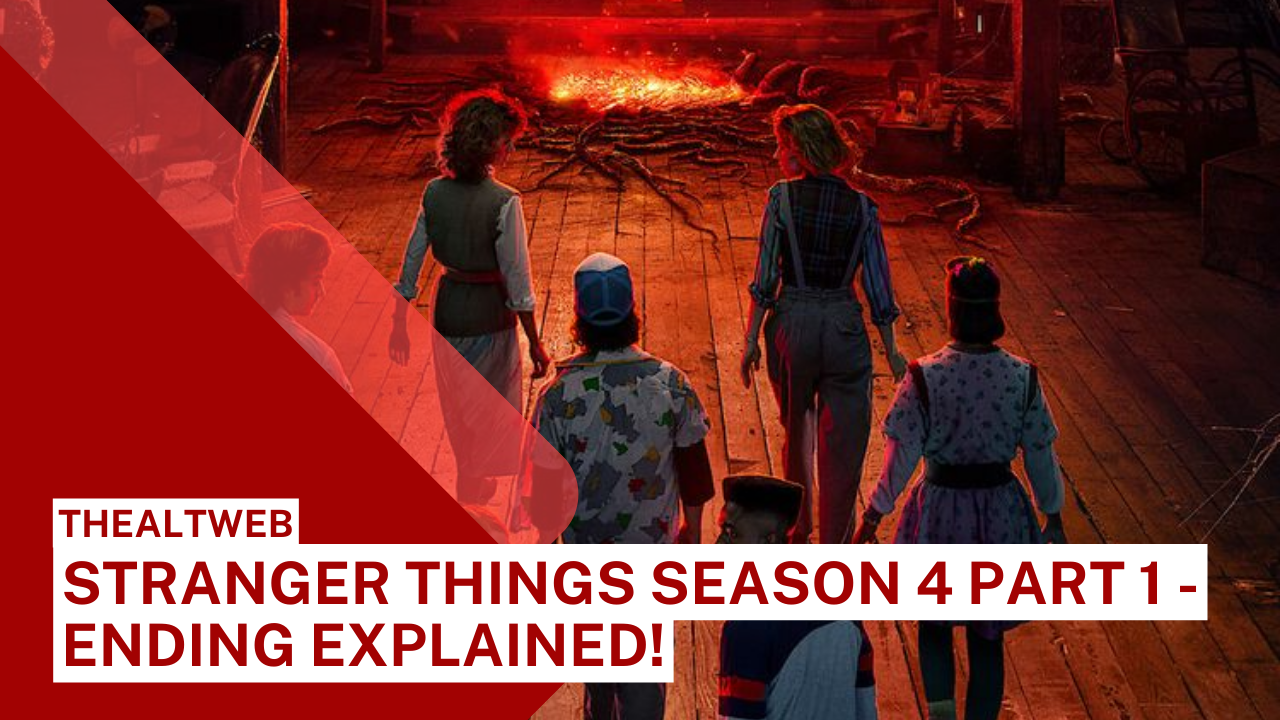 When “Stranger Things” arrived on Netflix in the summer of 2016, it burrowed its way into the hearts and brains of viewers like a tentacle vine from the Upside Down. The show mixed themes of horror, mystery, science fiction, and fantasy with nostalgia for the 1980s “kids-on-bikes” to appeal to a wide audience. With Seasons 2 and 3, the “Stranger Things” fanbase rose, but viewers had to wait three years for the next installment. The Hawkins kids, on the other hand, have returned.

Mike, Will, Dustin, Lucas, and Eleven are all freshmen in Season 4 (albeit the actors are now 17 to 19, due to COVID delays and an already aggressive production schedule), and they’re all struggling with high school. The episodes are also longer, averaging an hour and 20 minutes in length.

Mike, Will, Jonathan, and Argyle are on their way to the Nevada desert.

“Stranger Things 4” appeared to be bicoastal, with the Californians getting their own spring break plot. However, out west, things rapidly deteriorate. Mike, Will, and El have a tense relationship, and that’s before El skates Angela, the neighbourhood cruel girl. The police from Lenora Hills come to the Byers’ home to arrest El for assault, but the military and the Hawkins lab are also on the lookout for her.

Dr. Owens’ team sends a security detail to the Byers’ home, breaks El out, and persuades her to visit his subterranean lab, where he may be able to restore her powers. When she encounters Dr. Brenner again, she panics and needs to be drugged, but her telekinetic skills begin to return, and she decides to take part in “the Nina experiment” freely. Lt. Colonel Sullivan’s government soldiers, meanwhile, are hard on their tail. Mike, Will, and Jonathan flee in Argyle’s van after a tense gunfight. The guard dies, but not before handing Mike a pen with a coded phone number on it.

This is a computer number, not a phone number. Mike directs them to Dustin’s hacker girlfriend’s apartment in Salt Lake City. Suzie informs them that her PC has been confiscated as punishment for manipulating Dustin’s Latin grade (she thinks they’re trying to win him a video game system). Her numerous siblings, on the other hand, create a distraction, allowing them to break into her father’s office and track the IP address to Nevada locations. They’re set to take the road again with a printout of El’s location in hand when we last see them.

Jason’s gang is on a mission to exact retribution.

Jason Carver may believe he is the nice guy, but from his initial appearance at the pep rally, it is clear that he is one of the season’s many enemies to every “Stranger Things” viewer. We know Chrissy was seeing a guidance counselor, probably because her mother had a role in her body image issues, but the way she interacts with Eddie shows her relationship with Jason may not have been what the pair depicted it to be.

Although nearly everyone believes Eddie is to blame for Chrissy’s death, there are still unanswered concerns due to her peculiar death, which showed no traces of physical contact. Chrissy was to Eddie’s trailer to buy narcotics, according to the cops, but Jason isn’t convinced. He’s fed up with the authorities’ handling of the issue, so he gathers his basketball team (including Lucas) and takes matters into his own hands. Dustin could know anything, and Jason convinces Eddie’s bandmate. Lucas assists his buddies in eluding the jocks, but at Lover’s Lake, they catch up to Eddie.

Eddie tries to flee on a boat, and Jason and comrade Patrick swim after him. That’s when Vecna pulls a fantastic murder on Patrick. Instead of persuading Jason of Eddie’s innocence, the jock goes all out. Jason delivers a heated statement during a public forum, mirroring his pep talk from Episode 1, in which he claims Eddie has struck a bargain with the devil that the Hellfire Club is a deadly satanic cult. Despite the curfew, the majority of the town joins him in his pursuit of Eddie and the rest of the gang. After raising figurative pitchforks at the end of Part 1, they’re still at it.

The assassinations of Vecna open doors.

Before Max becomes Vecna’s next victim, the Hawkins gang is anxious to clear Eddie’s reputation and beat him. They follow Dustin’s compass to Lover’s Lake, where Patrick had just died a few hours previously. Passages between dimensions appeared near murder sites, according to Nancy. Nancy, Robin, Steve, and Eddie, the older children, board the boat to see if this is also true for Vecna, while Dustin, Max, and Lucas remain on the beach.

Steve finds a gate at the bottom of the lake, but he is drawn into the Upside Down by a vine. Nancy, Robin, and Eddie save him from the demo bats by following each other through the scary glowing rip. The team flees to Upside Down Skull Rock, then the Upside Down Wheeler house, since Demo-bats are protecting the “Watergate.” They can hear the other children in the real house, where they are being interrogated.

Eddie signals SOS in Morse code with a chandelier, while Dustin and Nancy converse using Lite Brite. He reminds them that if every attack results in a gate, Eddie’s uncle’s trailer should have one as well (not to mention one near where Fred died, which may yet come into play). Steve, Nancy, Robin, and Eddie hop on the Wheelers’ motorcycles and travel seven miles to the trailer park, where they see a large red gash in the ceiling. It not only gives a means of escape, but it also establishes an essential truth that will likely be more relevant in Part 2: Vecna’s attacks — and perhaps any death involving the Upside Down and its energies – open gates.

The Upside Down has been trapped in the past for a long time.

Nancy recommends arming herself with pistols she keeps in her bedroom while they’re in the Upside Down. Nancy is a gun enthusiast, which surprises the group, but they appreciate having access to her rifle and handgun. Unfortunately, the firearms are nowhere to be discovered when they arrive at the other Wheeler house and search Nancy’s room. When Nancy pulls up an old diary, she realizes why. Nancy’s diary pages are loaded with notes in her real bedroom, but in this realm, she stopped journaling about the time she began dating Steve. She mutters something about the Upside Down being a thing of the past.

We still don’t know how accurate Nancy’s theory is. Her chamber has been frozen in time for nearly three years, and the entire facility may operate on the same timekeeping system. Time in the Upside Down is varied, which is a more plausible explanation. Nancy’s bedroom is most likely frozen in time during either her most guilty moment (Barb’s death) or her first encounter with its otherworldly inhabitants. Similarly, the Upside Down Creel mansion, which looks to be a crucial site, maybe even the dimension’s core, could end up locked in 1959, the year of the awful catastrophe. If time is relative on the other side of those gates (and especially if it is related to individual experience), it adds an interesting new element to “Stranger Things” lore that might explain a lot about the show’s enigmatic underworld.

Hopper manages to flee the Demogorgon but not the Russian jail.

The narrative concerning Joyce and Murray’s effort to free Hopper from a Russian jail is the one that seems the most distant from the rest of the program (at least thus far). Joyce gets a doll in delivery from Russia. Murray tells her to shatter it, and she discovers a ransom letter. In return for their pal, someone going by the name of Enzo asks them to deliver $40,000 to Alaska.

It’s not a very realistic idea – Enzo (real name: Dmitri) gives them a 100 to 1 chance of winning — and it backfires spectacularly. When their go-between, Yuri, double-crosses them for more money, Hopper fractures his foot to escape his restraints and flee, but he is apprehended at the agreed-upon rendezvous location. Joyce and Murray use Murray’s blackbelt-level military skills to overtake Yuri in mid-flight, but they crash the plane since they don’t know how to fly.

Murray impersonates Yuri and gets them into the jail, where they find Hopper, Dmitri, and a dozen other hostages in a pit, prepared for a battle. The Demogorgon emerges from behind a mechanical, reinforced door. The majority of the inmates are soon dispatched, but Hopper uses an improvised torch to hold it at bay. Murray tries to persuade the guards to unlock the pit entrance by intimidating them, but they remain faithful to mother Russia, so Murray resorts to martial arts once more. Hopper and Dmitri will be on the other side of the door from the Demogorgon when it’s all said and done, but they’re still stuck in Russia for the time being.

Vecna still has Max and Nancy in her grip.

Nancy is chasing Steve into the Upside Down, but none of them has made it out. Nancy gets possessed by Vecna just as she is ready to ascend the rope when the smaller kids start to drag them through the gate of Eddie’s trailer. Nancy relives Barb’s death and subsequently finds herself in Upside Down’s deconstructed version of the Creel House, where she observes memories from Vecna’s youth. Steve is left desperately attempting to reawaken her.