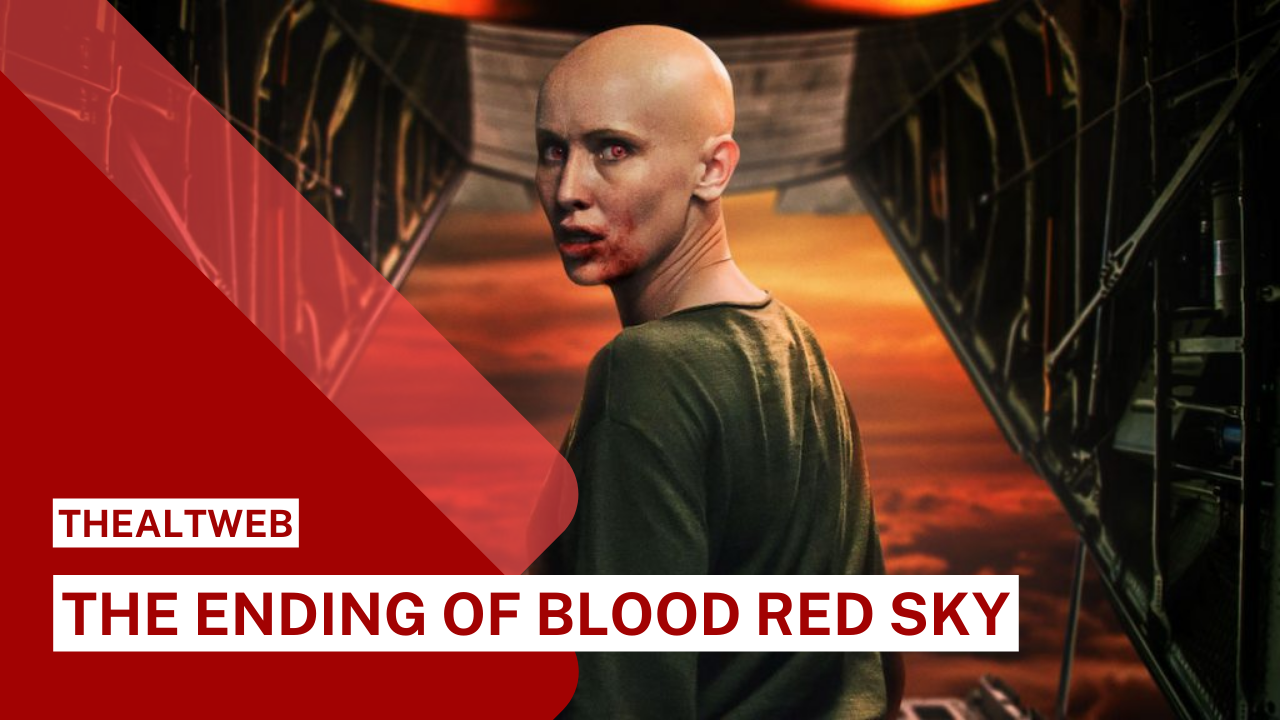 On July 23, 2021, Netflix launched “Blood Red Sky,” a popular new German-language horror movie. Like many great horror films, this one is a fusion of two genres: a thriller about an airplane hijacking and a vampire gorefest. The story follows Nadja, a mother who is diagnosed with leukemia but is actually vampirism, which she manages with medication. She attempts to go to New York City with her son Elias in order to receive medical care for her illness. Unfortunately for them, the plane is being hijacked by a group of hijackers. For the next two hours or so, Nadja must keep her son safe while also avoiding her own decline into vampirism and its spread to others.

She isn’t completely successful, though. One of the hijackers eventually injects himself with Nadja’s blood, and the rest of the passengers become infected as a result. Even Nadja is too far gone to revert to her human form when the plane finally lands. In the end, Elias must choose between destroying his mother and all the other vampires in order to keep the situation under control.

It may appear that Elias’ decision is unduly dark and surprising, yet it represents the climax of his and Nadja’s love. This is what “Blood Red Sky’s” finale actually signifies.

When Nadja becomes a vampire, her situation becomes even more direr.

Before we get to the conclusion, it’s important to understand Nadja’s motivations. We see how she became a vampire through flashbacks. Her spouse and she had car issues one night. A vampire attacked and killed her husband while she was hunting for assistance, then bit Nadja. The vampire’s father, an elderly guy who was also a vampire, was the next person Nadja met. To stop the disease from spreading, he tried to kill Nadja, but she overpowered him and killed him with a shovel.

This appears to be a selfish act at first glance. Nadja had the option of allowing herself to be killed in order to stop the disease from spreading. The only issue was that she had a small son who would be left without a parent. That makes Nadja’s vampirism even more difficult than a typical vampire’s.

She can’t just forsake Elias by sacrificing herself. However, if Nadja’s vampirism worsens, Elias will begin to appear appealing. Furthermore, she is unable to pass on her vampire status to others. It’s a terrible situation for her to be in, and it influences many of her choices throughout the film.

The tale is propelled forward by this conflict.

Elias is adamant about not abandoning his mother…

But there’s one more aspect aggravating Nadja’s situation: Elias’ love. Elias is unaware of his mother’s true condition at the beginning of the film. However, it has no effect on their relationship after he discovers it during the hijacking. A different youngster would have recoiled in terror at his mother’s vampire status, but Elias becomes even more motivated to save her. Several times throughout the film, he puts his life on the line to save his mother; at one point, he even defends her against the other passengers, who believe she’s gone too far.

This is touching for most of the film. However, when Nadja’s vampire tendencies grow, Elias’ loyalty becomes a liability. Nadja is well aware that she will eventually lose the final vestiges of her humanity and become a full-fledged vampire. Elias will be just too enticing to ignore once that happens.

…until he doesn’t have any other options.

Before the plane lands in Scotland, a turning point in Elias and Nadja’s relationship occurs. Elias feeds Nadja his own blood to restore her after she has been severely injured by one of the hijackers. But, if you’re familiar with vampires, you’re aware that this will have consequences. Nadja is kept alive by Elias’ blood, but it also gives her a thirst for her own child. Nadja begins to back away, knowing this. Ironically, one of her most human moments is when she screeches and growls at him to scare him away.

There’s no way back, unfortunately. Elias tries one final time after the plane lands to save his mother. He finds her when she’s feeding on a soldier, and this time she barely recognizes her kid – that flicker of recognition is probably the only thing keeping her from immediately attacking the boy. Nadja’s humanity was always anchored by Elias. Elias is just another possible target for her now that her humanity has vanished.

The conclusion is not completely depressing. Elias not only kills his mother with the explosion, but he also kills all the other vampires. Elias eventually accomplishes what his mother failed to do: halt the spread of vampirism.

Elias may now move on with his life, which will almost certainly include a lot of counseling.