Sailing on a Ship, Searching for Inspiration: John Constable 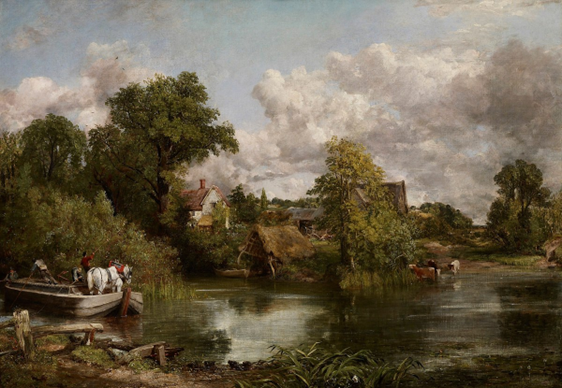 What is not always commonly known is that many of his paintings and drawings originated when he was on board a ship or boat on the rivers. He loved to create while on a ship and got the inspiration for many of his landscapes while being on a ship.

In this article, we’ll briefly look at the background of the painter John Constable and then discuss how he got his inspiration while sailing.

John Constable was born in the city of East Bergholt, on the River Stour in Suffolk. His father, a wealthy corn merchant, expected John to set up a business and succeed him in the business. After leaving school, Constable worked in the corn business, but his younger brother eventually took over the business.

As a young man, Constable undertook amateur sketching trips in the surrounding countryside – the area which later became the subject of a large proportion of his art. He also undertook ship trips on the river with his father and was, as a young man, already intrigued by the views of the river banks from a ship.

In 1799, Constable persuaded his father to let him pursue an art career. He entered the Royal Academy Schools, attended life classes, and studied and copied old masters. And later, in 1802, he eventually made a call to become a professional landscape painter.

By 1803, he exhibited some John Constable paintings at the Royal Academy. He also adopted a routine of spending winter in London and painting at East Bergholt in summer.

John married Maria Elizabeth Bicknell in October 1816 and went on a honeymoon tour to the south coast of England. The sea at Weymouth and Brighton stimulated Constable to develop new color and brushwork techniques.

In 1819 the first critical John Constable painting, “The White Horse,” was sold. This success led to Constable becoming an associate of the Royal Academy.

Constable’s election as an associate of the Royal Academy inspired him to paint a series of six monumental landscapes. These paintings were later called the “six-footers” because of their monumental scale. Today, they are considered the most forceful landscapes created in the 1800s in Europe.

In 1831 he was appointed Visitor at the Royal Academy, where he was popular with the students. His public lectures on the history of landscape painting were well-attended.

Constable Artist got Inspiration while on Ships and Boats

As mentioned above, John Constable was the son of a wealthy corn merchant on the River Stour in Suffolk. As his father expected him to take over the business one day, he accompanied his father on ship and boat trips when he was a young man.

Those trips didn’t do much for his foreseen career as a corn merchant, but his sailing trips inspired him to follow an art career and, in his own words, made him a painter. Many of the painter John Constable’s artworks were inspired by ship or boat trips. The paintings originated as a result of sketching during boat trips.

Art historians and scholars agree that these ship and boat trips inspired Constable to create his ultimate 1821-masterpiece, “The Hay Wain,” a landscape painting of the River Stour.

John Constable Paintings while on Ships

The most important of these shipping trips was aboard the East Indiaman ship “Coutts,” visiting southeast coastal ports. In 1803, Constable spent a long time on a ship trip with his friend and the ship’s captain, Robert Torin. They toured around the River Medway and River Thames.

During this trip, many John Constable paintings and drawings were created. They mainly were watercolor and pencil studies of the varied landscape and shipping scenes.

During this trip, he created the now-famous series of graphite sketches housed in the Tate in London. It is believed that at least 140 drawings by Constable artist were made during the trip. But unfortunately, only seven of them were recorded.

According to John Constable, he loved working on ships on the rivers as he saw all sorts of weather and the weather’s influence on landscape scenes.

He used these color images in his landscape artworks. He sometimes painted the same places but with different weather conditions and clouds. He also appreciated the opportunity to see and paint other boats and ships from views other than from thriver banks.

A watercolor painting of two square-rigged sailing ships on the river Thames had been missing for 50 years before it was rediscovered among a folio of old works. The painting was discovered when sold to auctioneers as part of a bundle of seemingly valueless prints. Unfortunately, this watercolor was right at the bottom of the pile.

It is a miniature painting on tatty paper depicting two three-masted sailing ships. John Constable spotted the two ships during a trip on a ship along River Medway and River Thames with a friend.

The artist used a restrained palette of gray and brown. This indicates he produced it at speed to capture the specific shapes of the sails and positions of the various boats on the water. Interestingly, art specialists say it was most probably sketched and painted in watercolor on the spot by Constable and that it would have taken him about five minutes to do.

John Constable is today recognized as one of the best landscape artists, not only in Britain but in the whole European art history. What is not always commonly known is that he got most of his Inspiration while on ship and boat trips on the rivers in Britain.

Gaming – Its Effect on Students and How Teachers Can Benefit

Do I need a Wi-Fi extender to boost the Wi-Fi network?